These Soviet Missiles Forced NATO's to Change Their War Plans 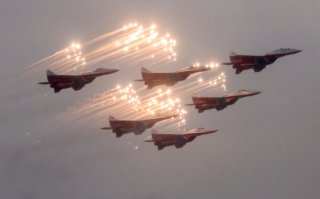 Here's What You Need To Remember:  The Russian Air Force probably continues to field them because their long-range outclasses most lesser adversaries who are unlikely to utilize ARH missiles. However, as seen in Syria, when danger is posed by a peer or near-peer air force, the R-27s will come off in favor of the R-77s.

It was first envisioned that there would be two different variants of the R-27 in service, a lighter K-27A for the MiG-29 with a shorter range and a heavier K-27B for the Su-27 with a longer range. As a result, the propulsion system for the missile was designed to be modular.

Another interesting design decision was the selection of the “butterfly” shaped control surfaces in the center of the missile. This was not uncontroversial. Some designers wanted a scheme similar to the earlier R-23 missile where control surfaces were mounted on the tail of the missile, as it afforded less air resistance at low angles of attack and was considered to be generally aerodynamically superior. However, the need for the missile to be modular took priority and that design was rejected, as mounting control surfaces on the rear would compromise the modularity of the propulsion system.

Also interesting is that the designers of the R-27 thought that even with advancements in Soviet technology the possible radar power and radar seeker sensitivity of the R-27 and its launching aircraft would be inferior in power and sensitivity to Western aircraft. To counter this, Soviet designers improved the lock-on after launch (LOAL) capabilities of the missile.

While the earlier R-23 missile had inertial LOAL, where the missile’s seeker could home in on a target after being launched and flying without a lock for some time with an inertial navigation system keeping the missile flying straight, the R-27 improved upon this by adding the ability for the aircraft to issue course corrections via a radio data link to the missile.

During the long development cycle of the R-27, it was realized that the semi-active radar homing (in which the missile homes in on a radar signal created by the launching aircraft) on which these missiles were based might become obsolete. Studies were made into creating an active radar homing (ARH) version of the missile. ARH missiles have a small radar in the seeker, which allows the missile to self-illuminate the target instead of relying on an external aircraft.

This version was called the R-27EA. Drafted in 1983, it also underwent development during the 1980s, but difficulties creating the small radar in the seeker delayed development. The fate of the project is uncertain, but most sources say major development was stopped around 1989 in order to focus on the R-77 missile instead, although work may have continued in private.

Overall, the main advantage of the R-27 series of missiles is the range on the ER variants, which is said to be around 130 km. This is far longer than any variant of the AIM-7 Sparrow, the closest NATO equivalent. The primary problem with the R-27 is that the long development cycle allowed American missiles to surpass it.

The compromised nature of the control surfaces probably also contributed to the decision to not further develop the missile. The next-generation ARH missile that was meant to arm the Soviet Air Force, the R-77, featured grid-fins on the rear of the missile for better maneuverability. Since the R-27 would never reach the level of aerodynamic performance of the R-77, it probably was determined to be a waste of further effort to give the missile ARH capability.

In many ways, the R-27ER can be seen as the “last gasp” of the SARH. It was designed to be one of the most advanced missiles of its type with long-range and mid-course correction capability, but by the time it entered service, its type of missile was nearing obsolescence. America fielded its first ARH missile in 1991, the AIM-120 AMRAAM, only one year after the R-27ER entered service.

The Russian Air Force probably continues to field them because their long-range outclasses most lesser adversaries who are unlikely to utilize ARH missiles. However, as seen in Syria, when danger is posed by a peer or near-peer air force, the R-27s will come off in favor of the R-77s.

Charlie Gao studied political and computer science at Grinnell College and is a frequent commentator on defense and national security issues. This first appeared in August 2018.