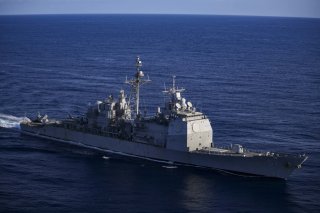 Here's What You Need to Remember: As the Navy decides on a long-term plan to phase out the Ticonderoga class, part of the cruiser fleet was entered into a modernization program.

U.S. lawmakers are reportedly at a stalemate over the fate of the Navy’s aging cruiser fleet.

The House Armed Services Committee’s Seapower and Projection Forces Subcommittee iteration of the annual defense policy bill lays the groundwork for the retirement of several cruisers while giving the green light for the construction of an additional destroyer, as first reported by USNI News. The subcommittee’s mark of the fiscal year 2022 bill authorizes two Arleigh Burke-class guided destroyers, one more than the Navy requested. It also provides for two Virginia-class submarines, one Constellation-class frigate, and several more support/logistics ships.

Controversially, the House mark does not prevent the Navy from retiring a slew of aging Ticonderoga-class guided-missile cruisers. Of the twenty-one Ticonderoga-class vessels currently in service, the Navy seeks to decommission as many as seven cruisers for the 2022 fiscal year: namely, the Anzio, Port Royal, Hué City, San Jacinto, Vella Gulf, Lake Champlain, and Monterey. At least five more cruisers are on the chopping block through 2026.

As the Navy decides on a long-term plan to phase out the Ticonderoga class, part of the cruiser fleet was entered into a modernization program. But the modernized cruisers are becoming increasingly costly to repair, refit, and maintain due to what some Navy officials believe to be their rapidly deteriorating condition. The Navy’s planned next-generation destroyer, dubbed the DDG(X) program, is slated to replace the Ticonderoga-class cruisers. However, those ships are not coming until around the fiscal year 2028. The Navy’s stopgap solution, increasingly supported by key lawmakers in the House, is to procure additional Flight III Arleigh Burke-class destroyers in coming years.

Still, not everyone on the House committee seems to be on the same page regarding the fate of the Navy’s cruisers. Vice-Chair and former Navy officer Rep. Elaine Luria (D-VA) argued that downsizing the cruiser fleet could carry dire consequences for the Navy’s near-term capabilities in the Pacific, especially in the midst of mounting Chinese threats and provocations against Taiwan. Subcommittee ranking member Rep. Rob Wittman (R-VA) remains something of a wild card in this debate, having previously expressed concerns on both sides of the cruiser issue. The Representative said that he is not unequivocally against retiring the cruisers, but that it must be done the “right way.” Wittman noted that the Navy stands to lose as many as 1,200 missile tubes, and with them, a significant portion of the military’s maritime strike capabilities. That is, if it is allowed to retire all of the cruisers that it wants in the timeframe that it seeks.

The Senate Armed Services Committee appears to diverge sharply from some in the House on the importance of keeping the Ticonderoga class in service. Though it has yet to release the full version of its bill, the Committee said in a summary that its budget “prohibits the early retirement of naval vessels unless the Secretary of the Navy makes certain certifications to Congress.” It remains to be seen whether or not this prohibition extends to all seven of the cruisers that the Navy wants decommissioned this upcoming fiscal year.