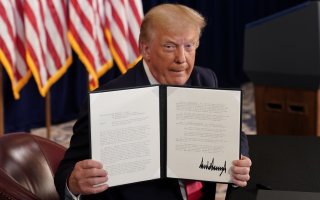 The two parties are far from agreement on another aid package, so President Trump has decided to take tax and spending measures by executive action. Here are a few thoughts:

Unemployment Benefits. Democrats want to extend extra unemployment benefits of $600 per week, and Trump has gone part way by extending them at $400 per week. The benefits create a work disincentive and will undermine the recovery. Even without the extra benefits, regular unemployment benefits cover 30 to 50 percent of prior paychecks. That is the level of benefits workers would expect, and they should have built their personal savings to help cushion the blow from possible unemployment.

When employed, workers at every income level should save. A WSJ piece discussed Ronald Read of Brattleboro, Vermont, who spent his career pumping gas and sweeping floors. His pay was low, but he was frugal and ended up saving $6 million and leaving it to charity when he died. There is no reason why government benefits should cover 100 percent or more of lost wages. When people are working, they should follow Read’s example and save.

Government benefits are not a freebie. Showering cash on people today comes at the cost of higher taxes on people tomorrow. As such, government aid generates ethical problems, not just microeconomic damage.

Payroll Tax Cut. Trump’s action defers payment of some Social Security payroll taxes, with a possible cancelation of the taxes later on. But if government continues spending on the program’s benefits, then the tax costs will simply be pushed forward. Why should politicians be able to impose the costs of today’s spending onto tomorrow’s workers? This year’s crisis has created huge economic damage. Deficit‐​spending can move costs to the future but can’t make costs disappear. The nation will have other crises to deal with down the road. It is unfair that people in the future will have to pay both the costs of the crises that will hit them and the costs of past crises. Trump and Congress should offset any payroll tax cuts by cutting Social Security benefits or other spending.

State and Local Aid. Congress has provided $150 billion in flexible aid to the states plus more than $280 billion in other state and local aid for health care, education, housing, transit, and food stamps. That is more than enough, and Trump is right to resist further intergovernmental aid.

Despite media stories to the contrary, local government revenues may not fall much, if at all, this year since property taxes are likely to remain buoyant. State government revenues may fall about 10 percent, but the states can handle that by tapping rainy day funds, freezing worker pay, cutting programs, and privatizing assets. State and local governments have enjoyed a decade of growth, and they should have been ready for the downturn.

Politicians always want to do something—anything—in response to downturns. But usually the best path is to leave the economy alone because markets adjust and resume growth by themselves. Indeed, shrinking the government’s footprint by cutting spending and regulations increases market flexibility and speeds the return to growth.

Federal aid is usually counterproductive because it creates microeconomic distortions that delay needed restructuring. More federal spending will undermine a speedy recovery, not help it.

This article by Chris Edwards was first published by the Cato Institute.