Unmatched Versatility: Iowa-Class Battleships Waged War for Half a Century 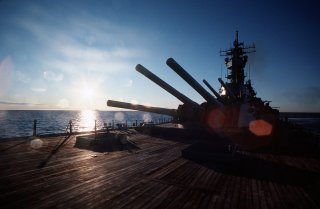 Here's What You Need to Remember: Despite their lavish main and secondary gun batteries, Iowa-class battleships like Wisconsin underwent their first repurposing as soon as they made their debut. The Japanese carrier air raid on Pearl Harbor underlined how naval warfare had changed by 1941. Battleships brought heavy long-distance firepower to a gunfight; carriers brought ultra-long-range precision firepower in the form of bombers and torpedo planes equipped with guidance systems known as pilots.

Thirty years ago last Friday the battleship USS Wisconsin steamed out of Hampton Roads bound for the Persian Gulf. The battlewagon performed a variety of tasks once on station that September, from querying passing merchant ships about contraband goods to refueling vessels with less capacious tanks to receiving mail and supplies by helicopter for onward transfer to the fleet. Diplomatic functions were routine. A congressional delegation flew out to tour the ship and meet the crew. General Colin Powell, the chairman of the Joint Chiefs of Staff, put in an appearance, as did U.S. and allied dignitaries and military officers of all descriptions. Meanwhile preparations for war proceeded apace. Operation Desert Shield was a busy time.

First of all, and most obviously, designers should equip vessels with capabilities likely to remain pertinent even as the martial seascape metamorphoses around them—as it will. Battleships were gunships. They sported mixed armament ranging from massive 16-inch main guns capable of flinging projectiles weighing the same as a VW Bug over twenty miles downrange, down to 5-inch guns for surface action and anti-air duty at middle ranges, down to light anti-aircraft guns of various calibers.