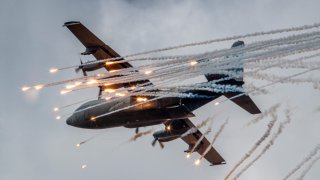 The Air Force is redefining the boundaries of traditional combat by further weaponizing its fleet of cargo planes with bombs, guns, missiles, and an ability to launch attack drones, expanding the mission scope of utility and cargo planes typically restricted to logistical missions such as troop transport and supply delivery.

“We are employing traditional weapons systems in non-traditional ways in terms of what we can turn mobility planes into. Why wouldn’t we think out of the box and move away from antiquated concepts to become more of a maneuver force,” Gen. Jacqueline Van Ovost, Commander, Air Mobility Command, told The Mitchell Institute in a video interview.

When faced with the question that weaponizing cargo planes could make them more likely to be subjected to enemy attacks, Van Ovost said “they are already targets. Enemies will go after the tankers and the airlifters because they are the supply line.”

Building upon the well known Defense Advanced Research Projects Agency (DARPA) Gremlins program in which C-130s have been able to launch and recover drones from the air, Van Ovost explained that indeed Cargo planes could take on these kinds of missions which would include a dual advantage of survivable stand-off launch distance for manned cargo planes as well as stand-in attack drones able to close in upon heavily defended areas for attack.

“We could get attritables that could be catapulted from and returned two a C-17 flying outside the kinetic threat range. Instead of a ground launch, how about an air-launch?” Van Ovost said.

Something like this could make a lot of sense if, as Van Ovost explained, a large, less-stealthy and more vulnerable C-17 could operate “outside the kinetic range,” yet launch targeted air attacks from stand-off distances by launching and operating drones as an airborne command and control node in the sky.

The Air Force has already for quite some time been experimenting with dropping palletized bombs out of C-130s, yet Van Ovost mentioned what sounded like an enterprising and as of yet unprecedented idea. Why not attack ground targets with air-to-ground missiles from a Cargo plane.

“We look at the SOCOM (Special Operations)  model and ask ourselves how you could do that with C-17s?  … and eject JASSMs out of the back. Instead of just dropping them off, we could drop them into the sky and somebody lights them off and sends them to target,” Van Ovost said.