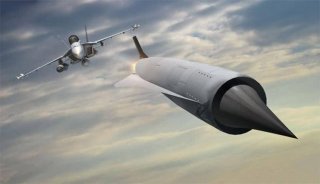 Here's What to Remember: The Air Force has been trying to make hypersonic missiles for quite some time. However, there have been some indications lately that it has struggled with difficulties.

Earlier this year, a prototype of the Air Force’s hypersonic AGM-183A Air-Launched Rapid Response Weapon (ARRW) failed to ignite after separating from the B-52 Stratofortress.

“The ARRW team continues to progress through the rapid prototyping effort with a steadfast commitment to the well-being of Airmen and equipment, striking a balance between prudent risk and rapid advancement of the program,” the Air Force statement after the test said.

Now, a new report states that Air Force Secretary Frank Kendall is “unsatisfied” with the progress of the hypersonics program.

Kendall noted when he spoke at the AFA’s Air, Space & Cyber Conference that the United States risks falling behind other countries’ hypersonic missile programs, according to Air Force Magazine.

“They’re moving very quickly,” Kendall said of Chinese and Russian hypersonics efforts, per the magazine. “They clearly see the value.” The secretary added that hypersonics are one of the possible “asymmetric approaches” “to force structure that China and Russia are taking,” while pointing out the need to find the “target set we want to address” with hypersonic missiles.

Kendall also stated that there remains a “question mark” about whether hypersonics is the most effective method of the Air Force mission. He added that he has yet to hear “all the analysis that has been done to justify the current program.”

“I think if the [funding is] there . . . the industrial base will respond,” Kendall said. “I think we will get there . . . but we have to solve the problem first of where we’re trying to go, and then get there as quickly as possible.”

Kendall, an Army officer who is also both an engineer and a lawyer, was previously the Undersecretary of Defense for Acquisition, Technology and Logistics—which made him the top weapons buyer in the Pentagon—during the Obama administration.

Kendall was nominated as Secretary of the Air Force in July by President Joe Biden and confirmed in July, after three Senators who had objected released their holds, per Defense News.

Two Democratic Senators from Michigan, Gary Peters and Debbie Stabenow, had temporarily placed holds in order to ensure that Michigan’s military installations remained in place, while holds had also been placed by Democrat Elizabeth Warren of Massachusetts and Republican Mike Lee of Utah. Warren had asked that Kendall agree to extend his ethics agreement and industry recusals, according to Air Force Magazine.

In addition to the Air Force, Kendall also oversees the Space Force.

​This article is being republished due to reader interest.