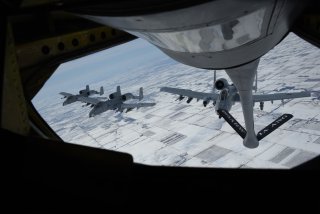 Here's What You Need to Remember: Unfortunately, defects in the camera reportedly make it harder for boom operators to get a good sense of the boom’s exact position. Furthermore, the automated system is reportedly “jerking” violently at the end of fuel delivery, damaging the receiving aircraft.

On January 10, 2019, the U.S. Air Force formally accepted delivery of its first brand-new KC-46 Pegasus tanker, an adaptation of the civilian Boeing 767 widebody airliner into a giant flying gas station and transport plane that can haul over 212,000 pounds of jet fuel. Four KC-46s are planned to begin service with the 22nd Air Refueling Wing at McConnell AFB, Kansas, by February, followed by aircraft deliveries to the 97th Wing in Air Mobility Wing at Altus AFB, Oklahoma. The air force may eventually seek to procure as many as 179 KC-46s.

However, the long-awaited tankers are being accepted into service despite still having Category-1 deficiencies—that is, the sort which usually disqualify a plane from procurement until they are resolved. In fact, the contract stipulates that the air force can withhold up to $28 million per plane on the $4.9 billion contract for fifty-two tankers until the bugs are fixed!

However, the new plans can’t arrive soon enough for the air force. Currently, it largely depends on nearly 400 aging KC-135 Stratotankers—a large portion in Air National Guard units—to keep its warplanes flying in the air. (There are also fifty-nine more modern KC-10 Extenders, based on the DC-10.) But the KC-135 is based on the 707 airliner which entered service in 1957. The Stratotankers routinely flying extremely long hours, and the aircraft are nearing the end of their services lives. Keeping the aging inventory in flyable condition will increasingly require large sums that could instead go to newer planes like the Pegasus.

Without tankers, though, the Pentagon’s staggering fleet of thousands of land- and carrier-based warplanes quite simply can’t fly far enough to perform many of their missions. Even long-range bombers like the stealthy B-2 Spirit bomber usually receive multiple aerial refueling to reach targets across the globe.

The Pegasus was originally scheduled for operational deployment in 2017 but has a long history of technical problems and cost delays—though in a rare win for taxpayers, Boeing has had to assume over $3 billion of those overruns at its own expense because it accepted a fixed-price contract. However, the Pentagon has been cajoled into helping pay for development of a new refueling boom to resolve ongoing technical issues, and the fact that booms, designed to operate against 1,400 pounds of pressure, is a bad fit for the Air Force’s A-10 attack jet, which can’t attain the needed levels of thrust.

Despite the steep expenses of procurement, the Air Force hopes the KC-46 will help lower operating costs thanks to more fuel-efficient engines. It can even fuel three aircraft at a time using additional refueling-pods on the tips of its wings which can deliver 400 gallons per minute.

The Pegasus is also more survivable due to its infrared countermeasures, radar-warning receiver and longer-range sensors. These are critical features, as long-range surface- and air-to-air missiles, and even new stealth jets, can threaten tanker planes from further away than ever before. Rather than targeting stealthy and elusive U.S. fighters, adversaries may seek to target ponderous, airliner-sized tankers in future conflicts—without which the accompanying fighters may not even be able to return to base!

However, there’s a major fly in the ointment, and it has to do with the Pegasus’s new state-of-the-art refueling boom. In the older KC-135, the boom operator must lay on their belly to observe the aircraft being refueled and manually maneuver the boom into alignment with the incoming jet’s refueling receptacle. With the new Pegasus, the boom is controlled remotely by a crew-member in the cockpit peering through a camera-based Remote Vision System.

Unfortunately, defects in the camera reportedly make it harder for boom operators to get a good sense of the boom’s exact position. Furthermore, the automated system is reportedly “jerking” violently at the end of fuel delivery, damaging the receiving aircraft.

This is particularly bad for stealth planes, which are coated with expensive radar-absorbent materials and engineered with extreme precision to minimize their radar-cross section. Even a small dent or scratch can significantly increase a stealth plane’s RCS and thus require expensive repair.

Therefore, until the boom accuracy problem can be fully addressed, the air force may be reluctant to use its brand new refueling tanker with its growing fleet of stealth aircraft. Hopefully, the Boeing will eventually deliver the necessary fixes. Meanwhile, the Pentagon is thinking ahead about procuring a hypothetical KC-Z stealth tanker that could accompany stealth aircraft into hostile airspace.