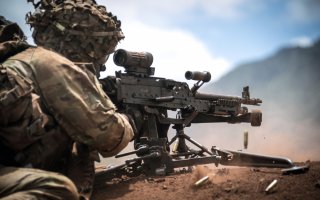 Here's What You Need to Know: Studies are now underway.

Even as the U.S. Army continues to test Next Generation Squad Weapon (NGSW) prototypes to determine which of the three platforms will replace the M4 carbine and M249 machine gun, efforts are now underway to find a replacement for the M240 machine gun as well. The Army, along with the United States Marine Corps, is seeking to streamline the arsenal of small arms.

In addition to replacing the 7.62mm M240 medium machine gun, the services are also reportedly seeking to find a replacement for the .50 caliber M2 "Ma Deuce."

"Based on the success of the Next Generation Squad Weapons (NGSW), we are interested in learning more about the possibilities in the state of technology for next-gen medium and next-gen heavy machine guns that would be used to potentially replace our legacy systems," said David Oatley, product director for crew-served weapons at the Army's Program Executive Office Soldier, as last week's National Defense Industrial Association's Armaments, Robotics and Munitions conference.

"Our systems have been around for a very long time, and we expect that we will want to increase that capability at some point in the future," added Oatley.

The Army is currently conducting a Platoon Arms and Ammunition Configuration Study, which was designed to help determine the small arms requirements for infantry squads Task and Purpose reported.

This would include a potential replacement for the M240, which is the American version of the FN-MAG designed in the 1950s by the Belgian arms maker Fabrique Nationale (FN). It was developed utilizing features that were found in both Axis and Allied infantry weapons used in the Second World War. The FN-MAG proved popular worldwide, and its heavier 7.62mm round gave it a maximum effective range of up to 1,800 meters. The M240 can fire 100 rounds per minute sustained fire, without overheating, while it can also fire up to 650 rounds per minute, but overheating is imminent. It is fed from disintegrating belts, but some M240 variants can be converted to use non-disintegrating belts as well.

The M240 weighs 27 pounds, and with a spare barrel, tripod, and other accessories and spare parts can weigh in at up to 47 pounds – which is why it is generally considered a medium machine gun rather than a true squad assault weapon (SAW).

This is not the first time that it has been suggested that the military would phase out the M240, which entered service with the U.S. Army in the 1970s. In 2018 the Military Times reported that weapons designers with the U.S. Special Operations Command and Marine Corps were considering options for a new machine gun that would use a powerful, long-range cartridge that would pack the same lethality as the .50 caliber but in a smaller/lighter package.