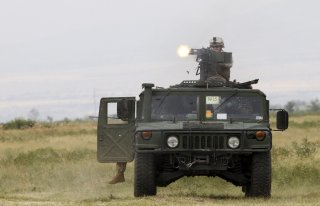 Here’s What You Need to Remember: Army soldiers are now testing new generations of infrared and electro-optical targeting technologies, one of which is called Advanced Targeting and Lethality Aided System, or ATLAS.

When tanks, armored vehicles, helicopters, and dismounted soldiers are closing with an enemy and “moving to contact” amid heavy incoming fire, an ability to quickly discern and execute targets can determine survival. In a fast-moving, dynamic combat environment, targets can emerge and disappear in seconds, often confusing or at least presenting complications for attacking forces. A tank gunner, helicopter pilot, or rifle-armed soldier will need to successfully identify a target before using lethal force, making the timing of crucial importance. Therefore, Army scientists, engineers, and weapons developers are working to test, assess and refine emerging technologies intended to massively expedite this process to give forces a timing and target-ID accuracy advantage in war. This overall approach often referred to as sensor-to-shooter time, represents a massive focal point for the Army across the force, as it pertains to all levels of military firepower, targeting, and combat decision making.

Army soldiers are now testing new generations of infrared and electro-optical targeting technologies, one of which is called Advanced Targeting and Lethality Aided System, or ATLAS.

“ATLAS uses an aided target recognition system that scans a field of regard, so the soldier is assisted by an artificial intelligence system that is also searching the scene,” Dr. John Graybeal, lead engineering psychologist for the Center’s Human Perception Laboratory,  Command, Control, Communications, Computers, Cyber, Intelligence, Surveillance, and Reconnaissance Center, Army Futures Command, said in an Army report.

Part of the intent of the assessments is to place emerging systems in the hands of soldiers for quick combat evaluations to determine what works, in order to streamline, expedite and optimize development.  For example, Graybeal explained a scenario wherein soldier input led developers to make an essential tweak or adjustment to the system.

“When the system thinks it detects a potential target, it takes a picture of it and sends it to the soldier. When we created the virtual prototype of this system and tested it, one of the things the soldiers talked about was what happened when they selected a picture of a potential threat. When a picture is selected, the system moves the soldier’s sensor feed to interrogate the potential target. While this should accelerate target engagements, one of the problems Soldiers encountered was they could easily lose track of where they were scanning previously,” Graybeal said.

The adjustment, he added, was to develop a solution to return the viewer back to their previous scanning position after a potential target is reviewed to helpfully and accurately orient the soldiers.

ATLAS relies heavily upon Aided Target Recognition, or AiTR, an AI-enabled technology that arguably functions in a manner similar to an F-35 Mission Data Files system. New data is gathered or taken in, such as an image or rendering of a target, and it is bounced off of a database to draw comparisons, perform analyses and provide the requisite context for human decisionmakers. Aided Target Recognition can, for example, discern the difference between an allied NATO tank and a Russian tank in a matter of seconds.

“The algorithm makes a decision on whether that is a target or not a target, then it slews the weapons system to that target and lays in the right firing solution and the right ammunition to engage that target,” Army Futures Command Commander Gen. John Murray told The National Interest in an interview earlier this year when talking about AiTR.

Murray, himself a former Bradley gunner, explained that when soldiers are able to identify close to seventy percent of flashcards containing pictures of threats, they were often made gunners. Now, Murray said, AiTR can accurately identify images of enemy threats as much as ninety-eight percent of the time, much faster than humans could process information.