The U.S. Military Is Building High-Energy Lasers for Next-Gen Warfare 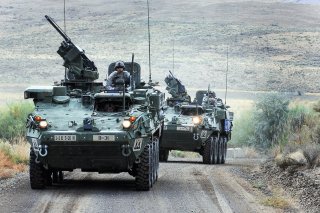 Here's What You Need to Know: Military scientists are seeking to create compact, transportable lasers that can be integrated onto fast-moving, fighter jets, tactical trucks, combat vehicles, and portable soldier devices.

The Army is firing laser weapons from armored platforms and tactical vehicles as it surges forward with new generations of combat systems for warfighters. The Stryker vehicle and small, mobile, tactical vehicles are already armed with five- to fifty-kilowatt lasers, but how about a three-hundred-kilowatt laser large and strong enough to incinerate an attacking cruise missile maneuvering at high speeds? This is the aim of the Army’s High Energy Laser (HEL) program, a collaborative military and industry effort to “power scale” lasers so that larger weapons can destroy more than just drones or small incoming projectiles.

General Atomics-Electromagnetic Systems is one of the vendors currently working with the Army on HEL. The HEL can work with multiple radar systems and potentially build upon recent networking successes experienced by the Army’s Sentinel A4 radar system and the Patriot missile defense system; the Army’s Patriot missiles have had some success tracking multiple maneuvering cruise missiles targets inbound to target. This is the kind of combat contingency for which the HEL might be well-positioned to support as the laser could integrate with the radar system to intercept and destroy incoming cruise missiles. The HEL could also integrate with the U.S. Marine Corps Ground/Air Task-Oriented Radar, which is yet another system intended to track and destroy large incoming threats. Additionally, the Army is having great success networking radar systems to one another in real-time to share target coordinates and create an integrated “meshed” network of defensive nodes. So one additional advantage of the HEL-radar integration is that this network could be synergized with HEL fire control to greatly expedited sensor-to-shooter intercept.

Could an armored vehicle with lower kilowatt lasers fire on enemy helicopters, drones or advancing infantry while moving? GA-EMS aims to create a weapon that can be integrated onto a wide range of platforms. Could a helicopter, drone or fighter jet eventually fire off a HEL? The technology would need to exist for a laser this powerful to fit on a smaller platform; however, given the pace of power-scaling progress, it certainly seems conceivable that there will continue to be new applications.

The military services are making quick progress on these types of initiatives. Their future depends on how rapidly weapons developers can engineer an exportable power small enough to travel on a fighter jet or drone. For example, the Air Force Research Lab has been working on this technology for many years, creating ground-firing prototypes and various airborne applications. The initial plan was to focus on large cargo planes because they might be well-suited to accommodate the weight and power requirements of laser weapons. However, while tactically useful, this effort is primarily viewed as an interim step toward putting laser weapons on fifth-generation stealth fighter jets like the F-35 fighter jet and other high-end airborne platforms.

Additionally, Army scientists and weapons developers are working to build lasers that are strong enough and durable enough to travel into space. They are seeking to create compact, transportable lasers that can be integrated onto fast-moving, fighter jets, tactical trucks, combat vehicles, and portable soldier devices. The Missile Defense Agency is currently “power scaling” lasers in preparation for using them for missile defenses. Meanwhile, the Air Force Research Laboratory is reducing the size of its mobile power systems so that fighter jets can fire lasers. Also, the Army is already arming Stryker vehicles with laser weapons.