The U.S. Military Is Gearing up for 'Orbital' Warfare 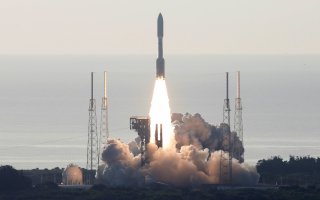 Here's What You Need to Know: The command has stood up several new Deltas which will carry out different tasks for the new branch.

The mission, assigned to a unit called Space Delta 9, has been stood up to conduct space surveillance and even launch space attacks when necessary.

“The mission of Delta 9 is to prepare, present and protect assigned and attached forces for the purpose of conducting protect and defend operations and providing national decision authorities with response options to deter and, when necessary, defeat orbital threats,” a U.S. Space Force report says.

The function of Delta 9 was announced in a tweet from Space Operations Command, according to a report from The Drive. Interestingly, the Delta 9 unit is tasked with overseeing operations of the Pentagon’s new, largely secretive X-37B mini space shuttle.

Concepts of Operations for orbital warfare bring many interesting possibilities to mind, many of which are now on the verge of operational functionality or at least in very mature stages of development. Certainly, the term refers to the addition and maintenance of a growing field of satellites, including Low and Medium Earth Orbit systems now being built by Air Force and Space Force weapons developers at very high operations tempo. These satellites will themselves need to be surveilled and, perhaps most of all, protected and hardened against fast-evolving kinds of anti-satellite weapons, including several already functional Russian and Chinese systems. The number of satellites can be multiplied, their datalinks can be hardened with new security technologies and satellites themselves might be armed with rockets, new sensors or even laser weapons.

Lasers are already being developed for space war, as evidenced by current laser “power scaling” taking place with the Missile Defense Agency, Navy and various industry partners. One possible application, as described to The National Interest by a Pentagon official, could involve the use of long-range, ship-or-ground-fired laser systems strong enough to travel into space and incinerate enemy missiles, intercontinental ballistic missiles (ICBMs) or satellites. While no specific programs have been announced so far, it takes little imagination to envision a time when satellites themselves fire laser interceptors to defend against space-traveling enemy missiles.

The atmosphere is space is highly conducive to the use of laser weapons, as conditions beyond the earth’s atmosphere create less beam attenuation likely to weaken or interfere with the strength of laser beams.

Could satellites be armed with attack rockets? Hypersonic weapons? Kill vehicle interceptors to track, discern and destroy ICBMs? Or even launch some kind of space drone or unmanned system for surveillance or attacks? All of this may, given the pace of ongoing technological development, become possible in coming years. The pressing question is simply how soon?