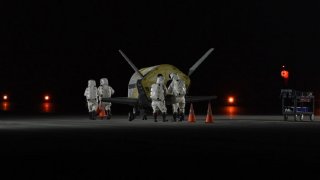 The U.S. Air Force is getting ready to launch its sixth mission with the mysterious X-37B space plane. If history is any guide, space mission OTV-6 could last as long as two years.

OTV stands for “Orbital Test Vehicle.” Officially, the Air Force deploys the 29-feet-long X-37B robotic mini-shuttle to test out new technology. But it’s obvious that the Boeing-made space plane is capable of much more than that.

Indeed, the X-37B seems to have a lot in common with some of the latest Chinese and Russian space weapons.

OTV-6 is scheduled to launch atop a United Launch Alliance Atlas V rocket at Cape Canaveral Air Force Station in Florida on May 16, 2020. The unmanned X-37B de-orbits on its own and lands like an airplane.

The X-37B blasted off for its first mission in April 2010. Where many satellites can function for up to a decade in orbit, the X-37B typically remains in orbit a year or two.

The Air Force operates two X-37Bs. While one is in space, the other is undergoing refurbishment.

The X-37B’s increasing endurance is testimony to its design and careful planning by its operators. The vehicle once in orbit deploys solar panels for powering on-board systems. It also packs liquid fuel for its maneuvering thrusters.

The Air Force as a matter of habit does not disclose the X-37B’s payloads. The service made an exception to that practice for OTV-5. The X-37B on that mission carried the Advanced Structurally Embedded Thermal Spreader built by the Air Force Research Laboratory.

According to the Air Force, the spreader helped to “test experimental electronics and oscillating heat pipe technologies in the long-duration space environment.” The X-37B itself, with its longer and longer missions, is driving demand in the United States for spacecraft components that can survive for years at a time in orbit.

The X-37B is capable of so much more. It’s worth noting that OTV-5 was the first X-37B mission to launch and land from a high inclination.

The fifth X-37B mission might have sent the mini-shuttle over large portions of Russian territory for the first time.

The X-37B is highly maneuverable, meaning it can quickly and repeatedly change its orbit. Russian and Chinese inspection satellites, which can double as weapons, also are maneuverable.

While inspection sats technically are non-military vehicles whose primary mission is to keep tabs on friendly spacecraft, in wartime the same vehicles could tamper with enemy satellites.