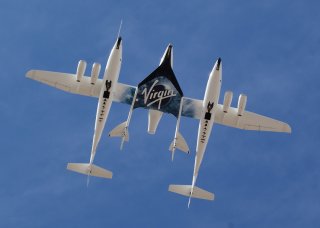 Roosevelt Lafontant had a dream. A U.S. Marine Corps officer assigned to the National Reconnaissance Office at the Pentagon, Lafontant had a back-row seat in late 2001 as the Marines spearheaded the invasion of landlocked Afghanistan. To reach Kandahar from their assault ships, the Marines had to fly more than 400 miles over Pakistan in rickety, heavy-lift helicopters. “There’s got to be a better way,” Lafontant recalled thinking.

There was a better way — one involving high technology and even higher ambition. As loopy as it sounded, Lafontant and like-minded officers wanted to send Marines into combat through space.

But robots would have gone first.

Lafontant’s original dream, now on hold, was to land squads of troops from near-orbit, using a vehicle he called Sustain, short for “Small Unit Space Transport and Insertion.”

In theory, Sustain could have deployed forces from the U.S. to anywhere in the world in only two hours. By flying at sub-orbital altitudes, Sustain would have been invulnerable to enemy air defenses and would have avoided violating the national airspace of countries bordering the war zone.

As sci-fi as it seemed, Sustain was a dream grounded in reality. In the early 2000s a new civilian space-tourism industry was emerging, revolving around various designs for cheap, two-stage rocket ships, capable of carrying a small number of passengers to an altitude just below the orbital threshold.

The first stage in these designs typically was a large, high-flying mothership aircraft. The mothership would launch a rocket-powered lander capable of reaching extremely high altitudes, then landing like an airplane. In other words, a space-plane.

Lafontant proposed adapting these motherships and space-planes to military missions. As a proof of concept, in October 2004 Burt Rutan’s four-ton SpaceShipOne launched from its WhiteKnight mothership and climbed to nearly 400,000 feet to win the $10-million Ansari X-Prize, a privately-funded competition meant to spur space-tourism development.

Even after SpaceShipOne’s dramatic success, most military planners considered Lafontant’s military space-plane a far-out notion — so far-out that many simply laughed when they heard it. But thanks in part to advances in robotics, the laughter soon stopped.

Lafontant’s space-plane got close to becoming reality, albeit in a very different form than he had first imagined. In 2008 the Marines teamed up with the Air Force and Special Operations Command to begin turning Sustain into a platform for deploying unmanned systems, anywhere in the world, on short notice.

“It’s an idea that refuses to die I think because it’s a good idea,” Lafontant said in 2009. But he underestimated his own role in keeping the concept alive despite criticism.

Over a span of years Lafontant assembled an enviable supporting cast to help advance Sustain. Lafontant’s recruits included heavyweights such as U.S. Air Force brigadier general Pete Worden and Marine Corps brigadier general Richard Zilmer. Their tireless efforts, especially between 2002 and 2006, convinced the Pentagon to at least study Sustain, if not spend much actual money on it.

The prospect of deploying robots from near-orbit was perhaps unthinkable when Sustain was first conceived in 2002. But in the development of military automatons, a few years is a long time. Between 2002 and 2009 the Pentagon expanded its robot force by two orders of magnitude. New robots were smarter, tougher, more diverse, more affordable and more likely candidates for sub-orbital deployment.

Robotics solved Sustain’s most intractable problem. Early studies of the Sustain concept, sponsored by the Marines’ Space Integration Branch, kept running into the same brick walls. The space tourism industry was quickly proving the concept of an affordable, two-stage, sub-orbital transport. And according to Worden, “it’s just a scaled-up version of that, that would do this [Sustain] mission.”

But militarizing a vehicle like SpaceShipOne was easier said than done. Not only would a military space-plane require a much larger payload than a civilian one, there was also the problem of recovery.

It was one thing to deliver a squad of Marines to some remote battlefield using a space-plane. It was quite another to bring them back the same way. Space-planes require motherships — and motherships need long runways and extensive launch infrastructure.

Recovery was the “million-dollar question,” according to Col. Pete Damphousse, who in 2008 became the Pentagon’s official point-man for Sustain, when the concept migrated from the Marine Corps Space Integration Branch to the secretive National Security Space Office.

The key to breaking through the recovery problem was swapping human beings for robots, at least in the early versions of Sustain. Using Sustain to deploy robots instead of people would have eliminated the need for recovery. After all, robots don’t have families. They don’t mind one-way missions.

“In certain scenarios, we would still like to put people on the ground,” Damphousse said. “But maybe in the nearer term, we put an Unmanned Aerial Vehicle overhead.”

In that way the Sustain lander, launched by a mothership, might itself have become a mothership used to deploy robotic aircraft from very high altitude over enemy territory. The lander would then spiral down to a landing in a nearby friendly country while the UAV completed its “suicide” mission.

Alternatively, the lander could touch down and deploy Unmanned Ground Vehicles. But this would be a tougher mission, Damphousse said. “UGVs … would be a follow-on evolution [of Sustain], because it may be less complicated to deploy a UAV in the upper atmosphere than to do a soft landing and deploy a ground vehicle.”

Damphousse was pursuing a two-pronged strategy for refining the Sustain concept, and inching it towards becoming a fully funded development program. In late 2008 and early 2009 he organized separate conferences for military planners and civilian engineers to get them all thinking about Sustain.

At the 2008 confab planners put their heads together to produce a “concept of operations” for Sustain, sketching out who might use a military space-plane, and how. The idea of deploying robots emerged from this conference, as did other potential uses for Sustain.

The Air Force considered using the Sustain mothership as a first-stage launch vehicle for satellites. The flying branch might also have used the Sustain lander as a high-speed, high-altitude reconnaissance system.

At their own conference in the spring of 2009, the engineers started with the “conops” and tried to match it up with the technology emerging from the space tourism industry, including Rutan’s enlarged SpaceShipTwo and its more powerful WhiteKnightTwo mothership. The idea was to capitalize on advancements in space tourism in order to avoid turning Sustain into a multibillion-dollar, government-only R&D program.

“We are interested in leveraging and catalyzing,” Damphousse explained. In the event that the space tourism industry encountered obstacles, the military thought it could provide targeted bursts of R&D funding or could offer up government test facilities and government engineers to help overcome any development problems.

Plus the Pentagon imagined it could sponsor competitions like the X-Prize, in order to sustain the technologies that might evolve into Sustain. One possible contest would have awarded cash to a team demonstrating the soft-landing capability necessary to deploy UGVs from near-orbit, Damphousse said.

In 2009 Lafontant predicted Sustain might start taking shape “around 2012, 2013.” “In a few years, what we think is impossible will really start coming together,” he said.

But Lafontant didn’t foresee the years-long economic downturn that sucked billions of dollars from military accounts — and the political gridlock that made the spending cuts even worse. In reality, 2012 came and went without any concrete progress for Sustain. Laftontant had retired. So had Damphousse. Unfunded, the National Security Space Office shut down.

Then in April 2013, the civilian SpaceShipTwo flew for the first time after dropping from the belly of its WhiteKnightTwo mothership. Despite a fatal crash in 2014, SpaceShipTwo could begin commercial operations into near-orbit in the early 2020s.

Inasmuch as Sustain is a militarized SpaceShipTwo, then at least the concept of robotic Space Marines is still viable … and Lafontant’s dream lives on.