This U.S. Missile Can Strike Any Target on Earth (In Under an Hour) 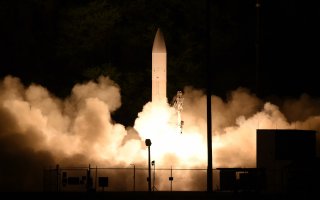 Here's What You Need to Know: One of the advantages of a conventionally-armed hypersonic missile capability would be to reduce the use of nuclear weapons in the event of a conflict.

The United States Navy and Army are working together to develop and eventually field a hypersonic glide body in the early- to mid-2020s. The missile, called the Common Hypersonic Glide Body, or C-HGB, differs from other glide vehicles that are being designed by DARPA or other military branches.

Unlike other glide bodies, the C-HGB is conical rather than wedge-shaped. The cone shape is seen as a more conservative design compared to wedges, which are still under development, though both missiles operate in a similar fashion. Using a rocket to get up to optimal speed and altitude, the glide vehicle separates from the rocket body and glides toward a target hundreds or even thousands of miles away at supersonic speeds.

Though cone designs are a less risky choice from a design standpoint, they are considered less maneuverable and therefore less survivable during their terminal flight phase when maneuvering around or through enemy missile defenses.

In March, the Department of Defense announced a successful C-HGB test near Hawaii. The test built upon data gathered during an earlier 2017 flight test and was more strenuous than previous testing. Video of the test, conducted at night, can be seen here.

Talking about the recent test, the lead designer for the C-HGB program said that during the test “we put additional stresses on the system and it was able to handle them all, due to the phenomenal expertise of our top-notch team of individuals from across government, industry and academia.”

While the Army plans to mate the C-HGB to road-mobile missile launchers, the Navy plans to use the hypersonic missile to equip several submarines. Block V Virginia-class submarines, a few of the Navy’s Ohio-class guided missile submarines, and the problematic Zumwalt-class of guided-missile destroyers are slated to onboard the C-HGB once it reaches operational capability.

The U.S. Air Force had also been a part of the development program but dropped out, opting to further develop their Air-Launched Rapid Response hypersonic weapon instead.

One of the advantages of a conventionally-armed hypersonic missile capability would be to reduce the use of nuclear weapons in the event of a conflict. The preemptive capability afforded by hypersonic speeds could allow high-value targets to be taken out with conventional explosives sooner than would be possible with nuclear inter-continental ballistic missiles, potentially reducing the severity of a future nuclear conflict.

Although the C-HGB program is being jointly tested by the Army and Navy, it is apparently intended to be used by every service, with “individual weapon systems and launchers tailored for launch from sea or land.” Stay tuned for more.