U.S. Navy Find Many at Fault for the USS Bonhomme Richard Fire 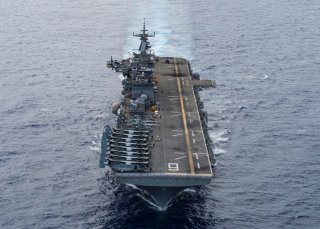 Here's What You Need to Know: The report has not officially been made public, and it is still reportedly unclear if any of the thirty-six individuals named within it have been published or will face punishment from their superiors.

The U.S. Navy is down an amphibious assault ship (LHD), and the service has now concluded that there were failures at all levels—from the commanders, crew members, and others that fueled the July 2020 arson fire that destroyed the USS Bonhomme Richard. The fire, which burned for four days in San Diego, California, injured forty sailors and twenty-three civilians.

The Navy's findings cast blame on thirty-six sailors, including five admirals for having a role that contributed to the loss of the warship. The report also identified multiple cascading failures in the fire response.

"Although the fire was started by an act of arson, the ship was lost due to an inability to extinguish the fire," wrote U.S. 3rd Fleet commander Vice Adm. Scott Conn, who is overseeing the Navy's investigation.

Arson charges have already been filed against one sailor, who has been identified as Seaman Apprentice Ryan Sawyer Mays in an affidavit that was unsealed in August 2021. Mays, 20, had allegedly started the fire out of animosity towards his commanders. He had reportedly aspired to become a SEAL but dropped out of the Basic Underwater Demolition/SEAL training after just five days in October 2019.

"According to Navy leadership, the morale and behavior of sailors who had aspired to become a SEAL, and then find themselves serving in a more traditional role on a Navy ship, are frequently very challenging," the affidavit noted.

Investigators with the Bureau of Alcohol, Tobacco, Firearms, and Explosives (ATF) were able to determine soon after the blaze was extinguished that it had originated below deck in a section called Lower V, where they found a container that had held a petroleum distillate believed to have been used to start the fire. Agents with the Naval Criminal Investigative Service began questioning sailors associated with Lower V, and those interviews led quickly to suspicion of Mays, Stars & Stripes reported.

While the Navy does believe the blaze was started by Mays, who has since maintained his innocence, the new report suggested that a multitude of mistakes were made in the first few minutes. Troops had failed to alert others to the fire for a full ten minutes upon discovering it and then failed to activate the firefighting foam system.

"A pattern of failed drills, minimal crew participation, an absence of basic knowledge on firefighting" then left the sailors unprepared, and furthermore unable to properly co-ordinate firefighting efforts with civilian officials, the report added.

An arsonist couldn't have picked a better time to cause such damage to the ship, the investigation found.

"In the 19 months executing the ship's maintenance availability, repeated failures allowed for the accumulation of significant risk and an inadequately prepared crew, which led to an ineffective fire response," wrote Adm. Conn.

In his report, Conn also concluded that the training and oversight failures throughout the fleet—from Naval Sea Systems Command, U.S. Pacific Fleet, Naval Surface Force Pacific Fleet, and several other commands—also contributed to the loss of the $2 billion warship.

The report has not officially been made public, and it is still reportedly unclear if any of the thirty-six individuals named within it have been published or will face punishment from their superiors.

The Navy decided last year to decommission and scrap the ship due to the damage. Commissioned in 1998, the 40,000-ton warship was one of the few amphibious assault vessels in service today that could operate with the F-35 Joint Strike Fighter.