The U.S. Navy Is Going All In On Autonomous Drones 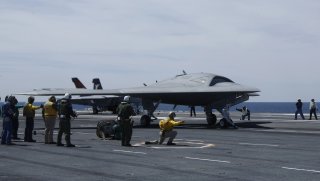 Here's What You Need to Remember: It’s notable that there have been increasing discussions about the merits of automating defensive, non-lethal weapons such as interceptors.

As the Navy fast-tracks a massive new fleet of robot warships armed with missiles, sub-hunting sonar, air defense radar and extensive command-and-control systems, the military service is refining technical requirements and concepts of operations for the new fleet.

The Navy is trying to accelerate testing, prototyping, development and deployment of a new fleet of unmanned systems. This large undertaking encompasses its small, medium and large surface and undersea drones. These new weapons will perform a wide range of missions. They will operate independently but also work in coordination with one another through advanced algorithms, automation and even artificial-intelligence-enabled functionality. This is the premise of Ghost Fleet Overlord, a multiyear Office of Naval Research-inspired program to bring autonomy to new levels of maritime warfare capability.

Concurrently, the scope, scale and range of autonomous operations are increasing. Now, it includes semi-autonomous mine-hunting drones armed with explosives, independent navigation and data analysis, self-operating sonar and acoustic communications systems, and early experiments with arming unmanned systems with weapons. Of course, per the Department of Defense’s doctrine, humans will be “in the loop” when it comes to decisions about lethal force. But it’s notable that there have been increasing discussions about the merits of automating defensive, non-lethal weapons such as interceptors.

“We continue to experiment with autonomy behaviors. Prototyping will allow us to explore what is required for self-defense,” Capt. Pete Small, the program manager of unmanned systems for Naval Sea Systems Command, said while speaking to an audience at the Navy League’s Sea-Air-Space Symposium.

Autonomous minesweeping or reconnaissance unmanned surface vessels (USV) could, for example, be armed with weapons and sensors to find, track and potentially intercept incoming weapons such as enemy anti-ship missiles or drone boats. Automated sensors could detect threats and operate the use of non-lethal defensive weaponry to massively improve the survivability of manned forces at sea by stopping attacks much earlier in the process.

Small says that requirements, tactics and concepts of operation are still evolving for many systems. This means some large, unmanned surface vessels such as the Sea Hunter anti-submarine and command-and-control drone ship will not need a human crew at all, whereas the Navy’s now-developing medium and large USV may at times need manning, Small explained.

“We may at times have a small detachment of personnel on a large USV,” Small said. “They will not be driving the ship or running operations necessarily but performing certain key tasks that are not at the moment automated such as refueling or anchoring.”