How the F-35 Stealth Fighter Could Attack Any Army 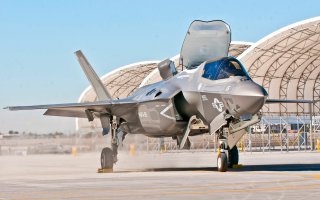 Long-revered by ground troops as a “flying tank,” the combat-proven A-10 Warthog attack aircraft has been indispensable to ground-war victory. Its titanium hull, 30mm cannon, durability, built-in redundancy and weapons range have enabled the aircraft to sustain large amounts of small arms fire and combat damage—and keep flying.

Given these factors, and the A-10's long and distinguished record of accomplishment in war, some might wonder why the U.S. Air Force is still moving quickly to retire the classic aircraft. While specifics informing many Air Force decisions of this kind are likely not available, the service has long maintained that the F-35 is well-positioned to pick up the Close Air Support (CAS) Mission. There may be no true substitute for the A-10, yet the prospect of flying an F-35 on CAS missions has long been on the radar; several years ago, the Pentagon conducted a specific CAS comparison or competition between the A-10 and the F-35 to assess their respective Close Air Support capabilities.

Upon initial examination, some might regard a stealthy, 5th-generation F-35 as ill-equipped or at least not suited for close air support. However, a closer look does seem to uncover a handful of advantages. Long-range F-35 sensors could enable the aircraft to see and destroy enemy ground targets with precision from much higher altitudes and much farther ranges than an A-10 could. The speed of an F-35, when compared to an A-10, would potentially make it better able to maneuver, elude enemy fire and get into position for attack. Like the A-10s 30mm gun, the F-35 has its own 25mm cannon mounted on its left wing which could attack ground forces. Given its sensor configuration, with things like a 360-degree Distributed Aperture System with cameras, the F-35 brings a drone-like Intelligence, Surveillance and Reconnaissance (ISR) component to air-ground war. This could help targeting, terrain analysis and much-needed precision attacks as U.S. soldiers fight up close with maneuvering enemy ground forces.

An F-35 might be better positioned to respond quickly to enemy force movement. In the event that enemy air threats emerge in a firefight, an F-35 could address them in a way an A-10 could not, obviously. An F-35 would be much better positioned to locate enemy long-range fires points of combat significance and destroy hostile artillery, mortar or long-range-fires launching points. Finally, while the A-10 has a surprisingly wide envelope of weapons, an F-35 could travel with a wider range of air-ground attack weapons—armed with advanced targeting technology.

There are, however, some unknowns that would need to be explored. For example: how much small arms fire could an F-35 withstand? Could it draw upon an A-10-like “hovering” technology to loiter near high-value target areas? To what extent could it keep flying in the event that major components, such as engines or fuselage components, were destroyed in war? All good questions that we could someday find out the answers to.