Tough As Nails: The A-10 Warthog Is Just Simply Unstoppable 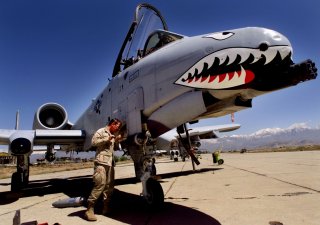 Big, tough, and powerful, The A-10 Thunderbolt II “flying tank” is one of the most iconic non-fighter aircraft of its time.

In the years following the Second World War, the U.S. military deprioritized the development of close-air-support (CAS) units—armored strike aircraft designed to carry out attack missions in conjunction with friendly ground forces—in favor of long-range fighters and nuclear-capable bombers. But the Air Force discovered over the course of the Vietnam War that its fighters flew too high and too fast to serve in a dedicated ground support role, prompting its interest in a modernized CAS platform.

The Fairchild Republic A-10 Thunderbolt II—affectionately nicknamed the “Warthog” by pilots—entered service in 1977, following a protracted procurement competition involving as many as six candidates.

For an aircraft with such a simple battlefield purpose, the Warthog was filled to the brim with sophisticated technology. Though the engines are not fully redundant, the aircraft can be, and has been, flown with only one operational engine; it can likewise continue to fly even with significant damage to the tail and wings. The A-10’s hydraulic flight system is both double-redundant and backed by a manual system. Intentional structural redundancies built into the plane’s armor allow it to withstand impact from armor-piercing projectiles of up to twenty-three millimeters. A titanium bathtub envelops the pilot, providing an additional layer of protection to what is already an exceedingly survivable airframe design. The A-10’s short take-off and landing capability (STOL) capability, combined with unusual engine placement, makes it well-suited for quickly deploying from austere forward bases.

The Warthog remains one of the toughest, most structurally durable aircraft ever built. “The A-10 is not agile, nimble, fast or quick,” A-10 Lt. Col. Ryan Haden told Scout Warrior in an interview. “It’s deliberate, measured, hefty, impactful, calculated and sound. There’s nothing flimsy or fragile about the way it is constructed or about the way that it flies.”

The A-10’s impressive survivability allows it to do what it does best: namely, delivering a staggering degree of firepower against ground targets. The Warthog’s nose-mounted, GAU-8/A Avenger thirty mm cannon can immobilize targets as well-armored as main battle tanks (MBT’s) from a range of 6,500 meters with its armor-piercing rounds, while easily shredding light armor. Its eleven hardpoints support a wide catalog of air-to-air and air-to-ground missiles, guided and unguided bombs, and Hydra seventy mm rockets.

The A-10’s star debut came during Operation Desert Storm, where it racked up nine hundred tank kills while also destroying two thousand military vehicles and 1,200 artillery pieces. Since then, the aircraft has continued to demonstrate its value in low-intensity, asymmetric conflicts where it can safely loiter and provide extended fire support. A-10’s took part in the Iraq and Afghanistan Wars, figuring prominently into U.S. strike capabilities against Taliban and Al Qaeda militants. More recently, Warthogs have conducted sorties against ISIS targets in Syria.

Over seven hundred A-10’s have been built, of which roughly three hundred are currently in service with the Air Force and Air National Guard. The A-10 has proven as durable on the battlefield as it has in the ledger books, so far surviving the Air Force’s ongoing attempts to retire it. Lawmakers have recently given the Warthog yet another lease on life; the Senate Armed Services Committee has proposed a 2022 defense spending plan that would keep the aircraft flying for at least another year. Boeing has been awarded a billion-dollar wing replacement contract to keep the Warthog flying through 2030, with the Senate seemingly insisting that the plane be kept in service for decades after that.