As Deterrence Fails, the U.S. Needs to Pull Out of Iraq 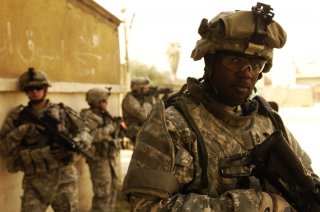 Rockets struck the U.S. embassy in Baghdad on Monday, following two attacks targeting American military bases this past week. With many analysts attributing the spate of attacks to Iran, there is pressure on the Biden administration to pursue a hardline response against Iran. But U.S. security doesn’t depend on Iran’s culpability in the attack. Rather than choosing who to fight, President Joe Biden could make the more prudent decision to withdraw altogether.

Attacks from Iran-aligned militias are not new. The United States fell into a spiral of escalation with Iran in 2019 for the same reason. But it’s paradoxical to protect American troops by pursuing actions that will result in more American troops being attacked. This isn’t to say that we just accept a new normal of rockets hitting U.S. troops weekly, either. But the way to stop these attacks is not with escalation.

Rather than juggle between confrontation and appeasement, the United States can reject this dichotomy altogether and simply leave militarily. President Ronald Reagan did just that in response to the 1983 Beirut barracks bombing. Biden doesn’t have to thread the needle of a “contested deterrence” that tolerates U.S. casualties as an acceptable price to contain Iran.

Iran is altogether not a threat to the United States or even the region. Iran’s conventional military is based on modified equipment from before the 1979 revolution. Iran’s only sources of strength are in its asymmetric forces in the Islamic Revolutionary Guard Corps. And these are not designed to take territory, but to punish and deter a superior rival with ballistic missiles.

Consequently, the United States would only be threatened if it chooses to stay in Iraq, Syria, and in the Persian Gulf, among the few places where Iran is actually capable of striking effectively. Iran is only powerful near its borders and in its maritime backyard. Unfortunately, that’s just where U.S. troops have been positioned. It’s rational to exchange vulnerability for invulnerability by moving troops out of Iran’s crosshairs.

The U.S. anti-ISIS mission in Iraq is an “advise-and-assist” mission meant to be handed over to Iraqis. Nearly two years have passed since ISIS lost all its territory and lost its leader. Preventing an ISIS resurgence requires addressing grievances, something the U.S. military is not equipped to do.

Moreover, the United States is overstaying its welcome despite the Iraqi parliament’s demands for withdrawal last year. Iraq’s sovereignty is not just a dispensation of American power, and both U.S. interests and the legitimacy of Iraq’s democracy would be furthered by a U.S. withdrawal.

Leaving militarily wouldn’t jeopardize U.S. aims of engaging Iraq, either. But this engagement would have to be diplomatic and economic. And this low-cost engagement is more commensurate with actual U.S. interests in the region. The United States is not as dependent on oil from the Middle East as in decades past. The benefit the United States derives from staying in Iraq is negligible compared to the risks of staying. Therefore, for the limited aims that are worth securing, a soft-power approach is the more prudent course of action.

The United States has two options in response to continued rocket attacks in Iraq. It can double down on a failed attempt at deterring Iran. Alternatively, Washington can acknowledge that the price of staying is not worth it and pursue limited objectives with a renewed diplomatic approach. There is no dishonor in leaving a conflict that’s not worth it. There is dishonor in sacrificing U.S. servicemen in vain. President Biden would better advance U.S. interests by advancing diplomatically and retrenching militarily.

Geoff LaMear is a Fellow at Defense Priorities.