The US Navy Is Looking to this Missile for Counterattacks 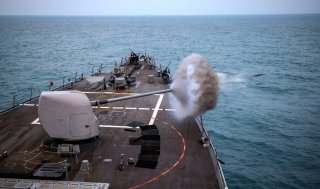 Here's What You Need to Remember: For example with proper networking, a land-based NSM could function as a critical defense “node” within a broader meshed system of sensors, meaning that its targeting technology might be in a position to locate launching enemy weapons and pass that information to allies with assets in the region.

The Navy and Marine Corps are continuing to find new uses and potential adaptations for the Naval Strike Missile (NSM), which arms the Littoral Combat Ship (LCS). The Marine Corps wants to widen its mission envelope to encompass a greater sphere of attack possibilities such as amphibious attacks, more varied maritime attacks and mobile ground-based anti-ship missile fires.

The NSM, a Raytheon-Kongsberg weapon in development for many years, arms the LCS and provides an over-the-horizon attack option to the ship. This is something that gives commanders the ability to track and destroy incoming anti-ship missiles at safer ranges. Additional uses for the weapon include the engineering of new variants that can fire from land to destroy anti-ship missiles from different vantage points. Additional adaptations to the weapon include wider distribution across the LCS fleet and perhaps various electronic enhancements or software upgrades to improve guidance, reliability or range.

The NSM first emerged in 2012. It consists of a 156-inch missile powered by a launch phase solid-propellant rocket motor booster and a turbo-jet engine fueled by JP-10. This enables it to fly at subsonic speeds for long periods of time. Most weapons are rarely referred to as stealthy; however, the NSM was designed to have a lower radar signature by virtue of being able to attack close to the surface in sea-skimming mode, essentially below the aperture of many ship-based radars. Additionally, the weapon has a range of up to one hundred nautical miles as well as advanced seeker technology, Raytheon developers said.

“It climbs and descends with the terrain and performs evasive maneuvers to counter the world’s most capable defense systems. NSM possesses the capability to identify targets down to ship class—a feature that is vitally important to warfighters who must strike only specific, selected targets in congested, contested and denied environments,” according to Navy Recognition.

In terms of production, Raytheon invested in domestic manufacturing facilities to meet the production demand of the Navy, Marine Corps and other customers. Since the Navy and Marine Corps are buying the same missile and using the same contract vehicle, they could save money through reduced unit prices and logistics commonality. Logistics commonality helps support the Navy and Marine Corps’ multi-domain warfare strategy. For example with proper networking, a land-based NSM could function as a critical defense “node” within a broader meshed system of sensors, meaning that its targeting technology might be in a position to locate launching enemy weapons and pass that information to allies with assets in the region.

What is more likely, however, is that an island NSM might receive targeting specifics from an aerial drone, submarine or ship-based radar system.