The U.S. Navy Wants Drones to Hunt and Destroy Submarines 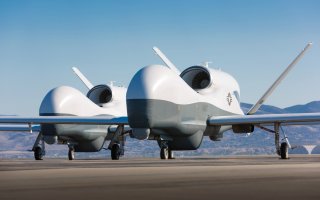 Here's What You Need to Know: Drones will have a critical role to play in future warfare.

Sonobuoy-equipped MH-60R helicopters launched from amphibious assault ships can search for submarines within a certain reachable radius of its host ship, depending their range and mission endurance. Yet, the scope of any submarine search is limited by the constraints of any manned air platform such as the MH-60R. However, drones do not have the same limitation.

Imagine launching drones armed with forty sonobuoys across wide swaths of open ocean. That kind of reach and spread would greatly expand the operational envelope of any Navy submarine hunting mission. This kind of operational possibility changes the mission sphere for anti-submarine warfare as it supports the possibility of more disaggregated or dispersed operations, something of great relevance given the service’s emphasis upon migrating quickly toward its Distributed Maritime Operations strategy (DMO).

This tactical concept informs the inspirational basis for an emerging technology made by Northrop Grumman and Ultra Electronics designed to combine signal input from a large number of dispersed and otherwise disconnected sonobuoy hydrophone antennas on the surface.

The concept began by envisioning a tactical circumstance wherein ship-launched drones could redefine the reach of sub-hunting missions by prototyping smaller, drone-carried sonobuoy dispensers. Towards this end, Northrop Grumman engineers sought to architect and apply new technology to actualize the Navy’s DMO strategy.

The principle aim, which Northrop Grumman innovators recently tested off the coast of California, is to disperse large numbers of smaller sonobuoy dispensers across otherwise unreachable swaths of ocean to extend the Navy’s submarine-hunting reach and collect or pool otherwise disparate individual return signals into a centralized or collective communications processing hub.

“A drone can go out and do preliminary searches and, when and if needed, cue a manned platform to certain high-value areas where a return ping might be arriving,” Dan Redman, Maritime Mission Expansion Manager, Northrop Grumman, told The National Interest in an interview.

A sonobuoy is descended beneath the surface of the ocean and, once an acoustic return signal or “ping” is detected by an undersea transducer, data is then sent up to a hydrophone buoy floating on the surface which then transmits crucial information back up to a helicopter or command and control aircraft using a VHF antenna kit.

The technical concept not only involves a smaller form factor and wider distribution but a multi-static or multi-directional pinging which seeks to gather or pool incoming signals from a number of otherwise separated or disaggregated sonar nodes.

“The hydrophone is constantly transmitting through a VHF frequency to an airplane or helicopter where the data gets processed. Multi-static means many receivers feed into a central hub,” Redman explained.

Redman explained that the new technology builds upon some cutting-edge systems.

“The technology already exists with manned systems. We have been working on a different design and integrating it into an unmanned system. We are trying to be forward-thinking so we are ready for the Navy,” Redman said.