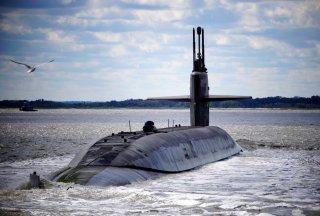 Here's What You Need to Remember: The Columbia's will have a longer mission life by virtue of being engineered with a “life-of-core” nuclear reactor, a system which means a boat will not have to return to dock for lengthy refueling. This extends mission life, and therefore the operations tempo, of the submarines.

America’s new nuclear missile submarines will secretly patrol the dark corners of the undersea, quietly tracking enemy movements sustaining a persistent threat of nuclear annihilation against anyone willing to launch a catastrophic first strike on the U.S. homeland.

The new class of submarines, slated to serve well into the 2080s or even beyond, may grow beyond the twelve planned boats, depending upon how various threats evolve. The Columbia's will have a longer mission life by virtue of being engineered with a “life-of-core” nuclear reactor, a system which means a boat will not have to return to dock for lengthy refueling. This extends mission life, and therefore the operations tempo, of the submarines. The new class will also incorporate some elements of the ultra-high-tech Virginia-class submarines such as a fiber optic cable for periscope viewing and semi-autonomous joystick-type controls to replace the older hydraulic systems.

Kris Osborn is defense editor for the National Interest. Osborn previously served at the Pentagon as a Highly Qualified Expert with the Office of the Assistant Secretary of the Army—Acquisition, Logistics & Technology. Osborn has also worked as an anchor and on-air military specialist at national TV networks. He has appeared as a guest military expert on Fox News, MSNBC, The Military Channel, and The History Channel. He also has a Masters Degree in Comparative Literature from Columbia University. This article first appeared in 2020 and is being republished due to reader interest.