Columbia-Class: The Most 'Stealth' U.S. Navy Submarine Ever? 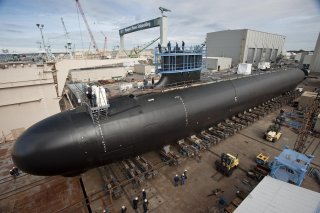 The very first nuclear-armed Columbia-class ballistic missile submarine will hit the wide ocean in 2031, marking an enterprising beginning to a new era of undersea strategic deterrence.

The move will bring new levels of navigational, command and control, weapons and quieting technologies to undersea warfare, as the Columbia-class will possibly be the stealthiest submarine ever to exist. The concept is both clear and well known: patrol the vast ocean in striking positions with submarine-launched Trident II D5 nuclear-armed missiles to ensure a catastrophic second strike in the event the U.S. mainland is subject to nuclear attack.

Early construction, science and technology efforts, prototyping and advanced electronics for the submarines have been underway for several years, and now the Navy is taking a new, vigorous step to expedite the arrival of the new platforms. The Navy has awarded a Columbia-class submarine construction deal to General Dynamics Electric Boat for an amount possibly up to $10 billion to build the first two of twelve planned boats.

Immediate work, as stated in DoD’s announcement, will include work on the U.K. Strategic Weapon Support System Kit as well as “continued design completion, engineering work and design support efforts.” The deal is also intended to help fortify the industrial base, the contract announcement states.

Using an electric motor optimizes use of installed reactor power in a more efficient way compared with mechanical drive submarines, making more on-board power available for other uses, according to an essay called “Evaluation and Comparison of Electric Propulsion Motors for Submarines.” Author Joel Harbour says that on mechanical drive submarines, 80-percent of the total reactor power is used exclusively for propulsion.