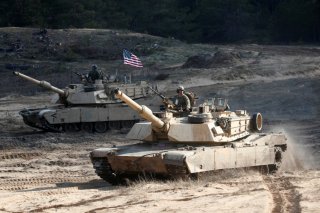 Here's What to Remember: Russia is not alone in working on efforts to better hit targets at distance. Last year the U.S. Army successfully tested its Extended Range Cannon Artillery (ERCA) system, which hit a target forty-three miles away. While this is still a self-propelled howitzer and not actually a tank, it is part of an emphasis to hit an enemy long before they can hit you back.

Ever since the first tanks rolled across the battlefield more than 100 years ago, there have been tradeoffs for the crew inside. While they were protected from small arms fire and were able to advance with some serious offensive capabilities, at the same time, their field of vision was drastically reduced. Even as optics and sensors have improved, a tank can generally only shoot at what it can see in front of it with any accuracy.

Efforts have been made to better provide tanks with over-the-horizon vision, and this week Russia announced that the first prototype of its newest T-90M Proryv tank has been equipped with an additional optoelectronic system, which will be tested in a series of military exercises soon.

“During the Army-2021 international forum, the static display of the Main Agency of Automobiles and Tanks of the Ministry of Defense of the Russian Federation showcased, for the first time, the T-90M Proryv main battle tank with an additional set of an optoelectronic system,” a Russian defense industry source told TASS on Wednesday.

“It was one of the first prototypes, which will be tested in military exercises soon,” the source explained, adding that the decision on serial deliveries of this version of the tank to the Russian troops will be made after the trials.

Also known as the Proryv-3 (Breakthrough-3), the T-90M tank is an improved version of the T-90 and was first publicly revealed in 2017. The first batch of these modernized T-90M tanks was delivered to Russian troops in the spring of 2020.

The T-90M features enhanced armor protection, which includes the Relikt built-in Explosive Reactive Armor (ERA) in place of the previous Kontakt-5. This can provide protection against tandem warheads while significantly reducing the penetration of Armor-Piercing Fin-Stabilizing Discarding Sabot rounds. The modernized tank is also equipped with a new turret module, which, in combination with a powerful weapon complex and automatic fire control system, reportedly greatly improves the tank’s combat capabilities. The tank’s 125 mm gun is reported to be capable of firing modern types of ammunition, including a guided missile that can destroy enemy tanks at a distance of up to five kilometers.

Tass reported that during the Army-2021 forum, the Russian Defense Ministry signed a contract with the Uralvagonzavod plant (part of the Rostec state corporation) stipulating the delivery of another batch of T-90M Proryv tanks and modernization of T-90 tanks to T-90M level.

Russia is not alone in working on efforts to better hit targets at distance. Last year the U.S. Army successfully tested its Extended Range Cannon Artillery (ERCA) system, which hit a target forty-three miles away. While this is still a self-propelled howitzer and not actually a tank, it is part of an emphasis to hit an enemy long before they can hit you back.

The Pentagon put the project on pause earlier this year, but perhaps with the news that Russia is working on an over-the-horizon weapon system, the ERCA could be given another chance.