Is the Army’s Strategic Long-Range Cannon Project a No-Go? 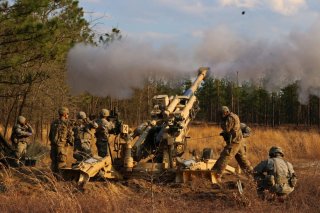 Here's What You Need to Remember: In 2020, the platform launched a shell a whopping seventy kilometers, or forty-three miles away. The shot is believed to be the longest on-target cannon shot in history.

It isn’t the only long-range project the Army has going, but if realized, would push the boundaries of what is possible with conventional artillery.

Although the Strategic Long-Range Cannon remains a priority for the Army, the project is currently on pause pending a report from the National Academies of Sciences, Engineering, and Medicine, a group of scientists, military personnel, academics, and private sector individuals who provide non-partisan and objective advice on various projects undertaken by the military. The committee will examine if the Army’s SLRC project is feasible, and look specifically at the “propellant, projectiles, electromagnetic launch, and the cannon itself.”

The Army developed an Extended Range Cannon Artillery prototype as a modified M109A7 self-propelled howitzer with the support of BAE Systems under a $45 million contract. The prototype’s objective is to double the Army’s current self-propelled howitzer’s range, achieved in part by extending the barrel to a whopping thirty feet. Using conventional ammunition, the M109A7 can fire projectiles out to twenty-one kilometers, or thirteen miles. This range extends to thirty kilometers, or nineteen miles when using rocket-assisted projectiles, essentially artillery rounds with a rocket motor in their base.

In 2020, the platform launched a shell a whopping seventy kilometers, or forty-three miles away. The shot is believed to be the longest on-target cannon shot in history. This incredibly high range was presumably achieved using an Excalibur munition, essentially an extended-range artillery shell that uses pop-out fins to glide towards its far-off target, and potentially aided by a rocket motor base.

Both of these initiatives have been motivated at least in part by the increasing likelihood of facing off against China or Russia, countries that are now considered near-peer rivals or adversaries. In order to keep both countries at bay in the event of a conflict, the Army wants its Strategic Long-Range Cannon to have an incredible one-thousand-mile range or just over sixteen hundred kilometers.

How exactly the Strategic Long-Range Cannon project would push projectiles out to one thousand miles remains to be seen. Projectiles are typically pushed out to farther distances by increasing the amount of propellant used to shoot them or by extending the length of cannon barrels, though there are practical limits to how long a cannon barrel is made, as well as how much explosive propellant can be used before a cannon simply explodes.

One option could be a more advanced gliding artillery shell with increased rocket motor propellant, which would in theory allow for greater ranges than the record forty-three-mile shot. Still, even with an extremely advanced, very long-range artillery shell design, one thousand miles would be extremely unlikely.

One proposed solution would be combining an artillery shell with a ramjet engine. Ramjets are essentially air-breathing engines that travel extremely fast, from Mach 3 to Mach 6. Ramjets rely on forward motion to compress air for combustion, and hence must be traveling at high speeds before producing thrust—high speed that could be afforded by being shot through an artillery gun barrel.

Another hint lies in the National Academies’ SLRC project description: electromagnetism. Could the Strategic Long-Range Cannon be a railgun? It’s possible—but we’ll have to wait and see.