VIDEO: Is This Russian Bomber the Answer To America's Killer Aircraft Carriers? 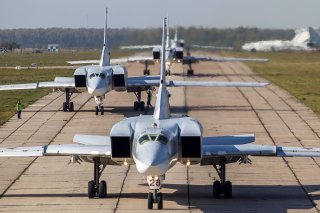 Here's What You Need To Remember: Russia is working to upgrade the long-range bomber as part of a power-projection strategy.

The one-minute clip, posted last year, offers extended takeoff, flight, and landing shots. There was no footage from inside the cockpit, which is perhaps a missed opportunity to corroborate Tupolev’s recurring talking point that the Tu-22M3M boasts 80% new avionics over the original Tu-22M. According to Tupolev’s press office, “The replacement of 80% [of the plane’s] avionics will improve navigation accuracy and level of automation, and streamline its technical maintenance as well as preflight routine.” Notably, the additions will include GLONASS navigation system integration, a digital onboard interface, modernized glass cockpit, and electronic warfare countermeasures (ECM)."