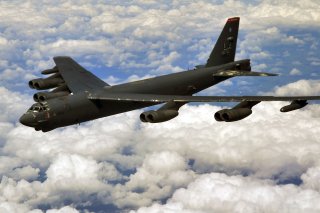 Key Point: Russia-NATO interceptions have been exceedingly common over the past several decades.

In what is yet another grain of sand on the beach of high-profile interceptions over Baltic airspace, the Russian Ministry of Defense announced back in 2019 that they scrambled Su-27 fighters twice within a 24-hour timespan to intercept B-52H strategic bombers flying close to Russian airspace.

“Two US aircraft had been detected by the Russian airspace monitoring system at a considerable distance from the state border of the Russian Federation and then were taken to escort,” their press release said. The Kremlin followed up their statement with cockpit footage from one of the Su-27 pilots, depicting seemingly standard escort maneuvers.

Unsurprisingly, the US Air Force (USAF) maintains that the B-52H bombers were conducting a routine NATO exercise: “The purpose of the flights was to conduct theater familiarization for aircrew members and to demonstrate U.S. commitment to allies and partners through the global employment of our military forces. U.S. Strategic Command regularly tests and evaluates the readiness of strategic assets to ensure we are able to honor our security commitments.” USAF Lt. Col. Davina Petermann added that the B-52’s were flying in full accordance with international law, and also with their transponders turned on.

However, a more substantive disagreement surrounds at least one of the interceptions.

Whereas initial Russian reports suggested that two Su-27’s forced a B-52H to turn away from Russia’s border, the USAF told Russian state news that “the Russian aircraft did not chase the B-52 away, and the bomber was able to complete its mission.” This type of unnecessary confusion perfectly illustrates the peril of the “shoot first, ask questions later” approach to reporting on interceptions.

With its low maintenance cost and plentiful supply, the four-decade-old Su-27 remains Russia’s interceptor of choice. At a time when Russian avionics are being modernized across a wide range of platforms, age offers another, less obvious advantage: experience. Many Russian pilots are intimately familiar with the way the Su-27 handles, bringing the delicate touch needed to manage escort missions without needless escalation. As Russian military expert Andrei Krasnoperov put it when commenting on a different Su-27 interception earlier this year, “ We don’t have rookies, and our pilot knows the plane’s capabilities. He knows how the Su-27 responds to various control commands, he knows much much to tilt, how much to thrust, and all the rest.”

As is frequently mentioned, Russia-NATO interceptions have been exceedingly common over the past several decades. But a much more recent, and quite alarming, trend is the newfound degree to which they are being publicized. As both sides race to exploit these episodes by presenting them as proof of the other’s malign intent, routine NATO-Russia aerial interactions are being recast in a new political light. The politicization of interceptions brings with it a host of unintended consequences. For one: it jeopardizes prospective airspace deconfliction talks by hitching them to broader diplomatic disputes, instead of treating them as the technical military matters that they are.

Driving the vicious circle of Baltic military escalation is a rendition of the age-old security dilemma: efforts by both sides to secure their share of Baltic airspace have only made Baltic airspace less secure for everyone. NATO Air Policing Missions to reassure its East European members are perceived by the Kremlin as proof of NATO’s aggressive intentions, while Russian patrols to ensure the integrity of their Baltic pathway to Kaliningrad are similarly interpreted in Washington as evidence of Russia’s offensive intent.