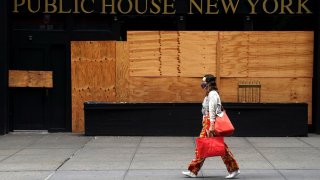 The Wall Street Journal has published a biased news story regarding state budgets. The piece by Kate Davidson and David Harrison reflects only Keynesian thinking, exaggerates the plight of governments, and only quotes analysts in favor of more federal bailouts.

Here are some of the problematic aspects of the piece:

The article cities analysts at liberal think tanks Brookings, TPC, and CBPP. It quotes a GOP senator who is one of the few Republicans in favor of another big state bailout. It quotes a scholar at conservative AEI who has a big‐​government view on this issue. And it cites Moody’s Analytics, which has a Keynesian economic model programed to show that government spending boosts GDP. Thus, the story cites six people in favor of another bailout and none against.

The article focuses on the most exaggerated estimate of state budget gaps, which is the Moody’s two‐​year figure of $500 billion. Why do they add two years together other than to produce a big‐​sounding number? The authoritative source of state budget data, NASBO, reports data on an annual basis.

The article includes a lower budget gap estimate by TPC, but excludes other recent lower estimates by Tax Foundation and economists Christos Makridis and Robert McNab. The Tax Foundation study shows that these three estimates are similar, and lower than the Moody’s outlier estimate highlighted by the WSJ.

The WSJ does not mention that the “gaps” and “shortfalls” it discusses are differences between pre‐​crisis forecasted revenues and current forecasts. If a state had forecast 2021 revenues to grow 5 percent but now expects 0 percent growth, the gap is said to be 5 percent and translated into dollars. The state would need to keep it’s 2021 spending flat to keep its budget balanced. That is not a crisis, especially after state general fund spending grew 5.5 percent in fiscal 2019 and 5.8 percent in fiscal 2020.

An alternative way to report budget gaps is to compare expected 2020 and 2021 revenues to actual peak 2019 revenues. That approach shows smaller gaps, as shown in the Tax Foundation study.

More broadly, Keynesian macro modeling ignores many microeconomic distortions caused by government spending that undermine GDP. I explore such distortions here. At minimum, reporters should note that the supposed simulative effects that groups such as Moody’s claim are short‐​term impacts and do not include the longer‐​term costs of government spending.

The other day, WSJ publisher Almar Latour criticized “agenda‐​driven reporting” and said his paper’s “news coverage stands as a beacon.” I love the Journal and read it every day, but there is room for improvement in the news department.

This article by Chris Edwards first appeared in CATO on August 13, 2020.