The Walther P22 Is Really the Cream of the Crop 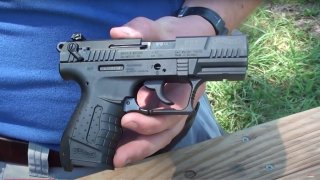 Here’s What You Need to Remember: I can’t recommend this pistol enough. It’s only $300 and is one of my absolute favorite .22 pistols to take out to the range. It’s just one of those guns that call out to you and begs you to shoot it.

Ilove a good Plinker-22. I have a few little rifles and pistols lying around in my gun safe that I like to break out for range day. I definitely have a bad habit of caving in and buying a little .22 LR pistol and justifying it by saying “it’s for work.”

The Walther P22Q is the latest rimfire pistol I’ve bought on a whim. Walther has been one of those companies that you hear about even before you get into firearms. I even had a Walther-branded airsoft gun as a kid.

The Walther P22Q has an extremely “classic” Walther look to it. It’s a familiar, sexy, ultra-clean gun that just hits the eyes just right. I’d even describe it as elegant to put it succinctly. The P22Q is right at the top of my list when I want to show off my nice guns.

This pistol has essentially no recoil, but that’s to be expected from a .22 LR in general. You can expect the Walther P22Q to handle exceptionally well even in the hands of a child or some just unfamiliar with firearms. As always, recoil plays a big part in precision.

The P22Q is an astoundingly accurate gun. I’m not trying to slam targets out past twenty-five yards, but the P22Q is still pretty bang on. I’d really attribute that to negligible recoil and smooth and easy actuation. Accuracy is usually limited by the shooter rather than the gun, but I almost felt like this little .22 made me shoot better.

Typically for pistols, I would go on and on about concealed carry and magazine capacity, but I find that it’s not necessary to go too in-depth with a bonafide range gun. Mag capacity is only 10+1 which I was fine with. I don’t have any problem reloading mags on range day(or before).

The P22Q is completely out of the question when it comes to concealed carry since it’s a .22 but could potentially function as a backup if you’re into that.

Now its reliability is really the cream of the crop so to speak. This thing can eat up ammunition like nobody’s business. I feel like it’d cycle ammunition I dug up out of my backyard with no problem, but I couldn’t do that to such a nice pistol.

I can’t recommend this pistol enough. It’s only $300 and is one of my absolute favorite .22 pistols to take out to the range. It’s just one of those guns that call out to you and begs you to shoot it.