Wanna See a Chinese General Sweat? Tell Them the B-2 Bomber Is Coming. 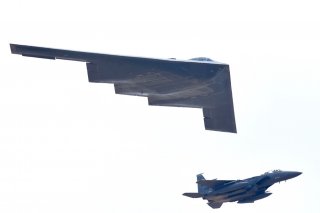 Here's What You Need to Remember: While always important, warfare readiness in the Pacific has taken on some new urgency in light of escalating tensions between the United States and China, a scenario resulting in an increase in patrols, combat exercises, and training missions throughout the region from both countries.

“We are sustaining a surge in bomber operations, vital to demonstrating peace and stability. We need to keep our adversaries off-balance. We have to persistently refine our operating concepts and develop new technologies,” Major General Mark E. Weatherington, Commander, Eighth Air Force, and Commander, Joint-Global Strike Operations Center, told The Mitchell Institute for Aerospace Studies in a video interview.

The higher op-tempo of BFTs is also designed to increase integration within and across a wide range of combat platforms, including multi-aircraft exercises, air-ground coordination, and networked targeting exercises. This also includes more joint operations, training with allies, and targeting practice with ground-based Joint Tactical Air Controllers. In addition to basing certain amounts of aircraft such as B-2s, B-52s, and drones in various strategically vital locations across the Pacific, the Air Force’s adjusted strategy is aimed at massively increasing warfare “readiness.”

While always important, warfare readiness in the Pacific has taken on some new urgency in light of escalating tensions between the United States and China, a scenario resulting in an increase in patrols, combat exercises, and training missions throughout the region from both countries.

The central concept related to these war preparations rests upon a well-known if contradictory principle to “be ready for war to keep the peace.” This often-discussed paradox informs the current strategy, which includes a larger number of integrated B-2 stealth bombers.

“With our range, capacity and flexibility, and the unique capabilities of the B-2, no other warfighting entity can do what we do,” Weatherington explained.

B-2 readiness continues to be a large priority for the Air Force as the service seeks to extend the combat effectiveness of the aircraft for many more years as larger numbers of the new B-21 begin to arrive. While the 1980s engineered, Cold War aircraft, today’s thirty-year-old B-2 is quite different from early models of the stealth bomber. Modern B-2s are getting new sensors to track enemy air defenses, faster computer processing, and upgraded weapons. The Air Force plan is to keep the B-2 flying for at least another decade or two.