Look Out, China: American Bombers Are Getting Less Predictable 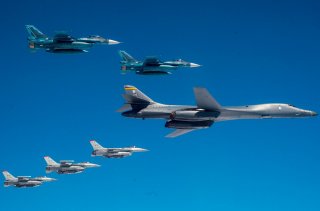 The U.S. Air Force is switching up the way it deploys heavy bombers to the Pacific region. The service hopes that a less predictable deployment pattern will help to confuse Chinese forces.

The base on April 13, 2020 staged a so-called “elephant walk” in order to celebrate the last contingent of bombers to participate in the Continuous Bomber Presence mission.

The B-52s the same day departed Guam and returned to their home base in North Dakota.

Guam for decades has been one of the Pentagon’s major aerial outposts in the western Pacific. During the Vietnam War in 1972, Andersen hosted more than a hundred B-52s for the brutal and bloody Linebacker II bombing campaign.

Under the Air Force’s new “dynamic force employment” scheme, bombers likely will return to Andersen. But their deployments won’t be predictable. And other bases will launch bomber sorties into the Pacific region, as well. The idea is to be unpredictable.

“Our diverse bomber fleet – B-52, B-1 and B-2 – allows us to respond to global events anytime, anywhere. Whether they’re launched from Louisiana, Guam or the U.K., long-range strategic bombers have and will remain a bedrock of our deterrence!” Air Force Global Strike Command tweeted on April 16, 2020.

The Air Force six days later launched its first dynamic bomber sortie. A B-1 took off from its base in South Dakota and, over the course of a 30-hour sortie, flew all the way to Japan and formed up with Japanese air force F-2 and F-15 fighters and locally-based U.S. Air Force F-16s before turning back toward the United States.

“This operation showcases our unwavering commitment to the security and stability of the Indo-Pacific region through the employment of strategic forces from around the globe,” Gen. C.Q. Brown, Jr., U.S. Pacific Air Forces commander, said in a statement.

Former U.S. Secretary of Defense Jim Mattis first pushed for dynamic force deployment back in 2018. The U.S. Navy adopted the scheme before the Air Force did. The Navy has begun revising deployment schedules for its 11 nuclear-powered aircraft carriers.

If unpredictability is the benefit of dynamic deployment, a lack of presence is the downside. Forces staging on short notice from the United States or other countries can thwart the enemy’s own planning. On the other hand, a steady, highly visible and, yes, predictable presence can also deter a potential opponent.

A February 2020 study by RAND, a California think tank with close ties to the U.S. military, found that long-term deployments are better at deterring war than are dynamic deployments.