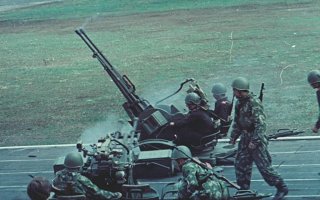 Here's What You Need to Know: In conflicts dominated by militias and paramilitary groups, the ZU-23’s truck-mounted future is secure.

The ZU-23 is a beast of a gun. The ZU-23 is a twin-barreled 23 millimeter anti-aircraft gun originally designed in the late 1950s in the Soviet Union for use against low-flying aircraft. It can also be pointed away from the sky and towards the land, against infantry and unarmored or lightly armored targets.

With its combined trailer and mount, it weighs over 2,000 pounds. Despite the high curb weight, the ZU-23 is surprisingly nimble. The trailer doubles as a firing mount, and the wheels can be folded outward for firing in less than one minute.

Despite the rapidity with which the ZU-23 can be deployed, it is somewhat limited by its rate of fire. Both barrels shoot the powerful 23x152 millimeter round, but rapidly heat up during extended firing. Although ZU-23s are equipped with several extra barrels that can be switched out, the overall rate of fire is hampered by the barrel exchange process.

The ZU-23 also served as a vehicle-mounted anti-aircraft gun when two ZU-23s were mated to a purpose-built tracked chassis, the ZSU-23-4, though not always in an anti-air role.

One of the theaters where the ZSU-23 excelled was during the Soviet-Afghan War. The tracked chassis proved to be well adapted to Afghanistan’s steep, mountainous terrain. As coalition forces in the early 2000s would also realize, the long distances and high mountain heights from which battles were fought favored heavier bullets and longer range. Here, the ZU-23’s 2.5 kilometer, or about 2 mile range and high traverse angle was particularly useful.

Still, there were some teething issues. Thanks to the aforementioned cooling deficiencies, the ZSU-23 would sometimes overheat during extended firing. This would make the gun uncontrollable, as a chambered round could sometimes cook off and fire without the trigger being pulled. This would created a dangerous positive feedback loop in which the cook off would cause the gun to chamber another round, which would also cook off, until the ammunition was exhausted. Until the gun’s cooling system was fixed, the ZSU-23 suffered from poor reliability.

Today, the ZU-23’s stars once again as a vehicle-mounted gun—though not on a tracked chassis but on pickup trucks. So-called technicals—essentially trucks that are equipped with a heavy machine gun, recoilless rifle, or anti-aircraft gun in the bed—effectively serve as a poor man’s calvary. ZU-23s serve effectively in conflicts that favor speed, or where warlords and strongmen can’t afford better armed and armored tanks or armored personnel carriers.

As jet fighters fly higher and faster, the ZU-23’s role as an anti-aircraft weapon has lessened. More advanced anti-aircraft missiles are better able to preform in the anti-aircraft role, leading to the ZU-23’s transition to vehicle rather than trailer mounts. Especially in conflicts dominated by militias and paramilitary groups, the ZU-23’s truck-mounted future is secure.