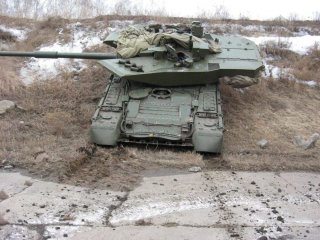 It wasn't likely an "April Fool's" joke when earlier this month images reportedly circulated on social media that seemed to show Russia's top-secret Burlak tank. The alleged photos showed a modified Burlak tank gun and turret, which has been in development since 2005.

The program was launched to replace the Soviet-era main battle tanks (MBTs) with a new platform by 2025. It involved utilizing a new unified two-man combat turret that could be employed on the T-72, T-80 and T-90 MBT chassis. However, due to financial problems the project was frozen indefinitely, and it had seemed that little – if any – progress had been made in recent years.

But then Dylan Malyasov, writing for Defence Blog, reported that the turret system was recently spotted on social media. The report cited Facebook user Алексей Хлопотов, who posted (roughly translated): "Armored ... Wow ... what a beauty surfaced on the 'Courage' forum! T-80BVM chassis with doped 'Burlak' fighting compartment. Apparently, something fresh, and even a video somewhere should be walking ... Daniil Nekkinen - this is a topic for you to gash."

An accompanying image posted on Facebook showed a T-80BVM chassis with what can only be described as a massive turret that was unlike past Soviet/Russian designs.

A Russian military blog provides a few extra details on the Burlak program. The goal of the project was to allow for an upgrade of existing Russian tanks and tank technology and result in a modern MBT. While it was previously shelved, it is worth noting that this could be far more affordable than the T-14 Armata, which has been repeatedly delayed.

According to the blog, "The tank uses the new design turret with low frontal profile and detachable transport and loading module. The armor protection of the front hull and turret is a modular design. The crew is stationed in the hull below the turret ring and completely separated from ammunition and fuel. The ammo is placed in the autonomous transport and loading module at the rear of turret with explosion redirecting panels for deflection of blast wave (blow-off panels)."

It also noted that the turret would be divided into three separate compartments for the gun, tank commander, and gunner. In this way, it would provide enhanced protection without any increase in overall dimensions but with a minimum increase in the mass. Additionally, the autoloader would be mounted outside of the fighting compartment. As a result of an ammunition fire, any blast would be direct outwards and prevent it from damaging the interior of the tank or putting the crew at greater risk.

The bigger consideration however is that the Burlak turret system could be employed on the T-80 tank chassis, of which Russia has hundreds, perhaps even thousands that could be utilized for such a purpose.

Such an upgraded tank would lack some of the advanced features of the T-14, yet it would certainly be more affordable, while Russia could quickly produce hundreds. Having modernized tanks that are still good is likely more appealing than waiting endlessly for a few of the more advanced T-14s to ever arrive.