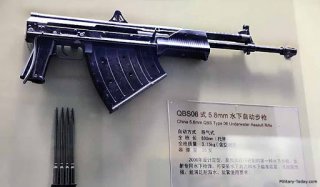 Here's What You Need To Remember: The divers, part of the People’s Liberation Army Marine Corps, shot a pretty unique piece of military equipment.

In a video posted online by the People’s Daily, a Chinese state-affiliated media organization, a group of Chinese divers can be seen training underwater. Swimming, diving, and shooting with specialized underwater weapons called needleguns.

As I’ve previously written, underwater rifles are a necessary—though tricky—piece of equipment in underwater operations and essential to underwater combat.

Conventional firearms just don’t do the trick underwater, and this interesting video shows exactly why. Underwater, bullets are subjected to enormous hydrodynamic resistance that causes the bullets to quickly tumble and lose momentum, limiting range to about six feet, or two meters, and making them useless at anything besides point-blank range. The solution? Needleguns.

Rather than shooting conventional bullets, needleguns fire elongated metal darts similar to thick knitting needles from a bullet casing. The long, narrow, needle-like profile allows an underwater shooter to more reliably hit targets past a couple of meters, though the range is nowhere as close to what is possible with conventional firearms and ammunition on land. A prime example of underwater firearms is the Soviet-developed APS underwater rifle.

Needleguns perform best in shallow waters. Both range and accuracy degrade when at depth, as higher water resistance in deeper waters increases hydrodynamic resistance. Maneuverability with the rifle is likely hampered by both the wide magazine and increased resistance underwater compared to on land. Similarly to how conventional firearms don’t perform well underwater, needleguns are rather ineffective on land. Shooter beware.

The group cited in the People’s Daily video, the Jiaolong Commandos, are ostensibly an “elite special operations force of the People’s Liberation Army Navy,” and train in “backwater infiltration, jungle search, and urban counter-terrorism” among other things.

In the video, the Jiaolong Commandos appear to be firing the QBS-06 underwater rifle, similar to the Soviet Union/Russia’s APS rifle. The QBS-06 also fires long steel darts that have a sharp, needle-like point. QBS-06 appears to be patterned after the APS. In any case, both rifles are quite similar.

In addition, the commandos can also be briefly seen shooting an underwater pistol. Unlike their magazine-feeding rifle counterparts, underwater pistols have multiple, pepperbox-style barrels and are generally not reloadable underwater but instead are single use only.

As tensions in the South China Sea increase, Beijing would like to project a sense of strength and security, a message that the Jiaolong Commandos video appears to express. Though some Chinese frogmen do seem well-equipped for an underwater shootout, they’re probably more likely to shoot at sharks than at soldiers.