We Have Video: Russia is Upgrading its Nuclear Drones and Hypersonic Missiles 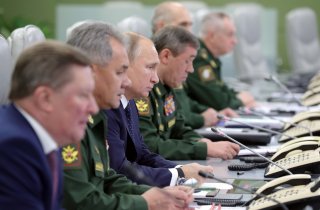 Here's What You Need To Remember: The Kremlin can be expected to ramp up their ongoing strategic weapons projects in a bid to diversify both their nuclear and conventional deterrent over the coming years.

Russian President Vladimir Putin’s February Address to the Federal Assembly made waves for its international political implications, and rightly so. But less covered, though arguably no less important, were Putin’s updates on several of Russia’s most ambitious weapons projects: Poseidon and Tsirkon.

As previously covered by The National Interest, Poseidon is a nuclear-powered underwater drone armed with a 2-megaton atomic payload. Its explosion is meant to generate a radioactive tsunami, capable of destroying coastal cities and other infrastructure several kilometers inland.

Poseidon is “successfully undergoing tests,” Putin announced last week. Later that day, the Russian Ministry of Defense released brief promotional footage to drive the point home. The video, entitled “proving grounds testing of the Poseidon system,” shows little of the Poseidon system in action. Instead, it depicts Russian sailors hustling about what appears to be the Sarov test submarine, before cutting to several green-tinted, above-surface shots of the submarine. Nonetheless, Defense Minister Shoigu declared the tests a success and the system is reportedly on track for its anticipated 2019 launch.

Putin added that Poseidon boasts an “unlimited range.” Presumably, this means that the underwater drone can traverse virtually infinite distances before reaching its target. With a maximum speed of 200 kilometers and effective depth of “thousands of feet” below the surface, the Kremlin believes that Poseidon travels too fast and too deep underwater to be reliably intercepted. While impressive on paper, it remains to be seen to what extent traveling at such breakneck speeds compromises Poseidon’s detectability as it enters within detonation range of its coastal target.

While others have expressed skepticism concerning Poseidon’s supposed invincibility and even its military value, what makes it such a potent addition to Russia’s nuclear arsenal is precisely that it can succeed strategically even if it fails tactically. Poseidon’s mere deployment off hostile coasts is almost guaranteed to cause mass political confusion, thereby serving as a cover for a different military or political operation even if it is ultimately intercepted.

Putin went on to highlight another “promising innovation”: “Tsirkon, a hypersonic missile that can reach speeds of approximately Mach 9 and strike a target more than 1,000 km away both underwater and on the ground. It can be launched from water, from surface vessels and from submarines, including those that were developed and built for carrying Kalibr high-precision missiles, which means it comes at no additional cost for us.”

This is more or less a condensed summary of what is already known about 3M22 Tsirkon, with one notable exception. Past reports have pegged Tsirkon’s speed at around Mach 6 with one CNBC source alleging Mach 8, but Putin is now publicly stating a speed of “approximately Mach 9” or around 6,900 miles per hour. There are a few factors that may account for this discrepancy: “approximately Mach 9” may be a generous way to describe the high end of Mach 8, Tsirkon’s speed may have increased from developmental progress made over the years, or there may be more than one version of Tsirkon.

Meanwhile, Putin’s emphasis on cost-effectiveness reflects one of Tsirkon’s guiding design principles as a versatile, multi-purpose weapon that seamlessly integrates with a wide range of existing delivery systems including even certain bomber aircraft.

Unlike with Poseidon, Russian officials have not offered a concrete timetable on Tsirkon’s development. But as Cold-War era arms control regimes continue to disintegrate, the Kremlin can be expected to ramp up their ongoing strategic weapons projects in a bid to diversify both their nuclear and conventional deterrent over the coming years.