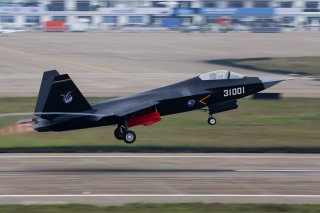 Here's What You Need To Remember: As for how the J-31 may be employed, Chinese and U.S. newspapers are filled with various kinds of speculation; some reports say the fighter is intended for export as a way to counter the reach and scope of the F-35, however other reports cite Chinese officials saying the J-31 is intended for domestic use and possibly could even fly off of Chinese aircraft carriers.

Improvements or changes to the J-31 likely continue a long-standing pattern of China’s apparent and somewhat visible effort to copy, steal or mirror designs used for the U.S. F-35. Virtually all photos and renderings of the J-31, since first unveiled, revealed a striking resemblance to the U.S. F-35. This does not come to the surprise of many in the U.S., given China’s well-known and documented cyber espionage efforts. A 2014 “U.S.-China Economic and Security Review Commission” Congressional report specifically cites a Defense Science Board finding that Chinese cyber attacks resulted in the theft of significant specs and technical details of a range of U.S. weapons systems—including the F-35.