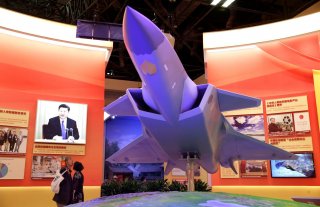 While debates and uncertainties continue to swirl around how agile, lethal, stealthy and advanced China’s J-20 stealth fighter may be, the country may simply have another challenge crippling its ability to rival the F-22 and F-35: There simply are not enough J-20s.

Several interesting reports cite production problems and delays with J-20 manufacturing, particularly centered around the J-20’s “high-thrust turbofan WS-15 engine.”  A report from the South China Morning Post says J-20 engine work has “fallen behind schedule,” and that China was “thought to have built about 50 J-20s by the end of 2019, but problems with the jets engines delayed production plans.”

If China has in fact produced 50 of its highly touted J-20, that still falls way short of the U.S.’ current fleet of ready and armed 5th Gen fighters. Lockheed statements given to The National Interest report that the firm has built and delivered 195 F-22s, with 186 of them combat ready. Made by Lockheed Martin and Boeing, the F-22 uses two Pratt & Whitney F119-PW-100 turbofan engines with afterburners and two-dimensional thrust vectoring nozzles, an Air Force statement said. It is 16-feet tall, 62-feet long and weighs 43,340 pounds. Its maximum take-off weight is 83,500; there is much interesting discussion comparing F-35 and F-22 engine thrust to China’s J-20 engine.

As for the F-35, available Lockheed data says it delivered its 134th F-35 last year and, at least prior to COVID-19, planned to deliver as many as 141 F-35s this year. The coronavirus, however, has impacted supply chain and production progress with the F-35, and Lockheed officials recently told Air Force Magazine that they expect to decrease aircraft production by 18-to-24 jets.

Of course it is not yet clear just how many J-20s China will build, or how fast they plan to build them. Nonetheless, slower or smaller scale J-20 production by no means erases or largely minimizes the growing threat presented by China’s Air Force.

The 2014 U.S.-China Economic and Security Review Commission recommended that Congress appoint an outside panel of experts to assess the U.S.-Chinese military balance and make recommendations regarding U.S. military plans and budgets, among other things. Despite being released in 2014, the findings of the report offer a detailed and insightful window into Chinese Air Force technology, progress and development.

The review states that the Chinese People’s Liberation Army had, as of 2014, approximately 2,200 operational aircraft, nearly 600 of which are considered modern.

Alongside the J-20, the Congressional report also cites Chinese prototyping of its stealthy J-31 and a host of other fast-modernizing aircraft presenting threats to the U.S. Air Force.

Alongside their J-10 and J-11 fighters, the Chinese also own Russian-built Su-27s and Su-30s and are on the verge of buying the new Su-35 from Russia at the time of the report, the review states.

In fact, this ambition did come to fruition, according to a May 1, 2020 report from The National Interest which states China has already bought as many as 24 Su-35s.

Finally, Chinese threats are by no means limited to the speed, range and maneuverability of the jets themselves, but the increasingly modern weapons they fire.