What American Javelin Missiles Can Do for Ukraine 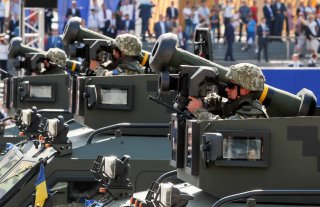 Here's What You Need to Remember: Ukraine received its first tranche of Javelins in 2018. Their second tranche was infamously delayed by the Trump administration in 2019, a part of the White House’s infamous quid-pro-quo scandal.

In an interview, Ukraine’s Commander-in-Chief Ruslan Khomchak said that following the advice of North Atlantic Treaty Organization (NATO) advisors, Ukraine’s American-supplied Javelin anti-tank missiles would be moved up to Ukraine’s front lines in their conflict against separatists in the country’s east—though the missiles would have to be used only defensively.

Ukraine has received a prodigious amount of military assistance from the United States and other NATO partners. Starting in 2014 after the Russian annexation of Crimea, Ukraine received more than $490 million from the United States alone. Initially, American military assistance was non-lethal in nature—communication systems, radar equipment, anti-sniper systems, and armored vehicles.

The most significant American contribution to Ukraine’s fight is the Javelin anti-tank guided missile. Originally designed in the late 1980s, the Javelin is a relatively lightweight and man-portable anti-tank weapon. Boasting a nearly three-mile range (almost five kilometers) the Javelin is a powerful anti-armor missile. Against armored targets like tanks or armored personnel carriers, the Javelin uses a top-attack flight profile in which the vehicle’s thinner top armor is targeted. It can also use a direct-attack flight mode for buildings, helicopters, or other unarmored targets.

Ukraine received its first tranche of Javelins in 2018. Their second tranche was infamously delayed by the Trump administration in 2019, a part of the White House’s infamous quid-pro-quo scandal.

Until now, Ukraine’s American Javelins were to be deployed behind Ukraine’s front lines as a deterrent to separatist armor supplied and sometimes crewed by Russia. The decision to move Javelins closer to or even up to the front lines indicates that Ukraine’s military is now able to adhere to American end-use monitoring.

To meet end-use monitoring requirements, countries that receive American defense equipment have to “not retransfer equipment to third parties without first receiving written U.S. government authorization, not dispose of or use the defense article for purposes other than those for which they were furnished without first receiving written U.S. government authorization; and, maintain the security of any item with substantially the same degree of protection afforded to it by the U.S. government.”

Ukraine’s armed forces and intelligence are known for their elevated levels of corruption—during the 2014 Crimean annexation, about 50% of Ukraine soldiers and sailors stationed there defected to Russia, many with their equipment, vehicles, or ships. Meeting American end-use monitoring requirements indicates that they’ve managed to clean up their act and that the United States is not worried about Javelins falling into Russian or separatist hands.

What constitutes a defensive use of Ukraine’s anti-tank missiles is highly debatable. Hypothetical scenarios in which Javelins are used to preempt a Russian-backed armor attack are not unimaginable. Either way, having American Javelin missiles closer to Ukraine’s front lines serves as a powerful deterrent to Russian-backed separatists, to Russia, and as a strong affirmation of American—and NATO—support for Ukraine.