What Are Robot Soldiers Doing on the Gaza Border Wall? 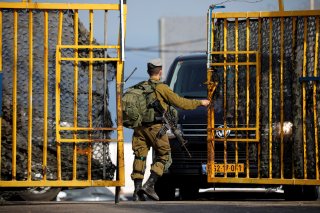 Here's What You Need to Remember: An IDF soldier also comments that the Jaguar “…can mount almost any weapon, rocket launchers, less [than] lethal weapons and crowd-dispersal means.” The latter two items suggest that beyond Gaza, Jaguars may be employed in confrontations with protesters or rioters.

A photo posted last Saturday appears to confirm that the Israeli Defense Forces (IDF) has operationally deployed Jaguar robotic vehicles armed with machine guns to patrol the Gaza border wall. The unmanned system also has a built-in public address system which could be used to warn border infiltrators to cease and desist.

It’s unclear how recently this began, as the image, posted by the National Resistance Brigades, the armed wing of a small Marxist-Leninist Palestinian group, is undated. The IDF first announced it would deploy the mobile robotic sentries earlier in April, prior to a war with Hamas in May.

The Gaza border barrier, which began construction in 1994 and has been progressively reinforced since, encompasses the small coastal territory governed by the extremist group Hamas.

The wall has decreased the frequency of terrorist attacks on nearby Israeli communities, prompting Hamas’s current focus on using rockets to attack Israel. However, the barrier (which is matched by a barrier on the Egyptian border) also has cut off Gazans from employment, emergency medical care, and other services. Palestinians routinely organize protests near the wall which at times have been met with lethal force. Hamas militants also frequently shoot at the IDF forces guarding the barrier with anti-tank missiles, sniper rifles and mortars.

Supposedly Jaguars will assume routine patrol duties for the Gaza division, reducing by one battalion the forces deployed to guard the barrier. The diminutive six-wheeled unmanned ground vehicle (UGV) built by Israeli Aerospace Industries weighs only 1.5 tons and uses numerous high-resolution cameras both for surveillance and to avoid getting stuck while driving on rough terrain. This sort of self-driving capacity is seen as a technical breakthrough given how much harder it is to implement self-driving vehicles in off-road contexts. The Jaguar’s sensor also allows it to operate in fog and dust, and the vehicle can automatically recharge itself at a charging station with a simple command.

The armament—either a 7.62-millimeter FN MAG or 5.56-millimeter Negev machine gun with 400 or 500 rounds, respectively—is mounted on a stabilized Pitbull remote weapon system made by Israeli firm General Robotic. This weighs around 200 pounds and allows accurate fire while on the move. Cameras integrated in the Pitbull enable detection of a human being from up to 1.2 kilometers away in daylight, or out to 800 meters at night using a thermal sight.

It also can also be optionally equipped with sensors designed to pinpoint the sources of incoming small arms and anti-tank fire, as well as employ a radar, though the IDF hasn’t revealed to what extent it’s deploying those capabilities.

However, it’s reported the Jaguar is fitted with a self-disabling device so that, in the event one falls into the hands of hostile forces, they won’t be able to recover any sensitive components. It also can transmit its coordinates so that it can be tracked and presumably destroyed by an orbiting drone.

An IDF soldier also comments that the Jaguar “…can mount almost any weapon, rocket launchers, less [than] lethal weapons and crowd-dispersal means.” The latter two items suggest that beyond Gaza, Jaguars may be employed in confrontations with protesters or rioters.

Like the aforementioned robotic sentry gun turrets deployed around Gaza, the Jaguar is usually remotely operated by a human being, and would typically be teamed up with dismounted soldiers observing from a safe vantage and surveillance drones flying overhead. The command link reportedly has a range of “miles,” which if true, is impressive given difficulties maintaining a reliable communication link with other robotic ground combat vehicles.

In an article for Shephard Media, Arie Egozie that “The [Concept of Operations] for Jaguar is to integrate it with tactical forces in mobile, dismounted operations. The IDF foresees a support role for the vehicle in a wide range of missions, including intelligence, surveillance and armed reconnaissance; convoy protection; decoy; ambush; and attack.”

In a video, an IDF soldier explains “Surveillance teams will plan the missions and operate the assets under the commander’s instructions. When there is a threat, there is always a person in the control room, who handles the incident.”

Ordinarily, decisions to use lethal force would be made by the operator using a “touch and fire” interface, with the robot automatically adjusting its aim to track a moving target and correct for accuracy. The Pitbull also has a track-and-fire capability for shooting down aerial drones.

In combat, that mode might be desirable when facing possible disruption to the Jaguar’s command link. But in areas proximate to civilians, such a mode could pose ethical issues because that could mean entrusting an artificial intelligence to make decisions on whether or not to kill a human being. Discriminating military from civilian targets is already difficult for human beings, and an artificial intelligence may have a weaker grasp of the context to make such decisions.

The IDF has broader ambitions to eventually integrate the Jaguar into its conventional warfighting capabilities, using it as an expendable scout at the vanguard of mobile ground formations. However, the system’s role in a border patrol and possibly anti-riot capacity will likely continue to receive scrutiny as public security services across the world explore deploying unmanned systems with offensive capabilities.