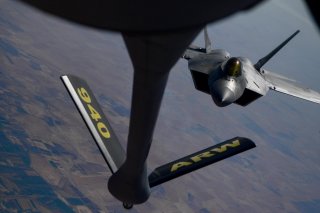 Key Point: The fifth-generation F-22A Raptor has been described as being unmatched by any known or projected fighter aircraft yet the program has already been grounded.

A weapon system can never really be too good or too revolutionary, but history has shown that radically advanced military hardware can result in unforeseen consequences. Such was the case of the Royal Navy's HMS Dreadnought, a warship so advanced in its day that it made obsolete an entire generation of battleships. Ironically, despite creating a global navy arms race the Dreadnought never even took part in a major naval battle.

The Lockheed Martin F-22 Raptor may not have spurred on an aviation arms race, but after just four years of service the program was cut short due to high costs. In addition, when the aircraft entered service in late 2005 there was a lack of air-to-air missions where this twin-engine, all-weather stealth tactical fighter aircraft where it would likely see service. At the time the U.S. military was engaged in ground wars in both Afghanistan and Iraq, while both China and Russia were facing delays with their respective advanced fighter programs.

For those reasons the United States Air Forces, which selected the F-22 as part of its Advanced Tactical Fighter (ATF) program, opted to cut it short in favor of the more versatile F-35. However, the Lockheed Martin fighter has remained a critical component of the Global Strike Task Force.

The fifth-generation fighter was developed at the Aeronautical Systems Center at Wright-Patterson Air Force Base outside Dayton, Ohio. The advanced tactical fighter was designed as a supersonic, dual-engine fighter – and its design even won the 2006 Robert J. Collier Trophy from the American National Aeronautic Association (NAA). (/)

In 2002 the USAF redesignated it the F/A-22 to reflect its multi-mission capability where it could take part in both ground attacks and in an air-to-air role. However, the designation was updated again to F-22A in 2005. While the USAF had originally planned to buy 750 of the fighters, the program was scaled back to just 187 operation production aircraft and the last F-22 was delivered in 2012.

Last December Lockheed Martin was awarded a $7billion five-year contract extension to maintain the stealth fighters through December of 2032. The USAF plans to operate the F-22 until at least 2074.

The fighter will remain deadly to targets in the air and on the ground. It features a sophisticated sensor suite that allows the pilot to track, identify, shoot and kill air-to-air threats, while advances in cockpit design and sensor fusion have improved the pilot's situational awareness.

The Raptor is also quite a weapon's platform and in its air-to-air configuration it carries six AIM-120 AMRAAMs and two AIM-9 Sidewinders; while for ground attacks, it can be configured to carry two 1,000-pound GBU-32 Joint Direct Attack Munitions internally. There is on-board avionics for navigation and weapons delivery, and these are enhanced by the addition of upgraded radar and up to eight small diameter bombs. The F-22 can also be configured to carry two AIM-120s and two AIM-9s in its air-to-ground role.

The other advantage that this fifth-generation fighter has is speed. Simply put the F-22 engines are able to produce more thrust than any current fighter engine flying today. The plane's aerodynamic design along with increased thrust allowed it to cruise at supersonic airspeeds with utilizing its afterburner. The Raptor can roar into action and get out just as quickly.

Image: A U.S. Air Force F-22 Raptor, prepares to connect with a KC-135 Stratotanker during an aerial refueling mission above an undisclosed location, out of Al Udeid Air Base, Qatar, in this undated handout picture released by U.S. Air Force on July 29, 2019. Chris Drzazgowsk/U.S. Air Force/Handout via REUTERS