What is a "Ground Effect Vehicle?" 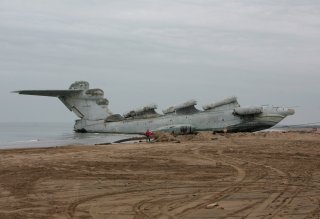 Here's What You Need To Remember: Despite the overall favorable capabilities displayed by the X-114, and an evaluation by the West German Ministry of Defense, the project was not further pursued.

Ground effect vehicles take advantage of a flight phenomenon in which an aircraft at low altitude experiences lower drag and increased lift, in effect “floating” along the surface of the ground. Thanks to this odd phenomenon, ground effect vehicles can have much smaller wings than would be possible for normal fight at higher altitudes, though they are unable to reach altitudes much higher than a few dozen feet. While this restricts their use somewhat, ground effect vehicles have been used with some success, particularly by the Soviet Union in the 1970s and 1980s.

While most ground effect vehicles have rather short and stubby straight wings, the X-114 used an interesting inverted delta wing design to provide more lift to reach higher altitudes. This unique wing shape, which seemingly pointed backwards, supported a small, centrally located cabin that extended past the wings’ leading edge and looked rather like a helicopter fuselage.

At the other end of the X-114, and conventional T-tail assembly extended past the point of the wing. Small winglets capped off both wings and provided lateral stability. A small-output engine powered a rear-facing pusher-style propeller assembly. Since the X-114 was intended to fly over land as well as water, it had landing gear that could be retracted when not in use. For a ground effect vehicle, the X-114 could reach an astonishing 800 meters, or about 2,600 feet in altitude.

Caleb Larson is a defense writer for the National Interest. He holds a Master of Public Policy and covers U.S. and Russian security, European defense issues, and German politics and culture. This article first appeared several months ago.