What If the Air Force Arms Its B-1 Bombers With Hypersonic Missiles? 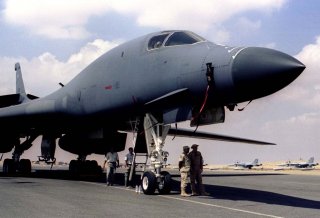 Key Point: These bombers are some of the best. If hypesonics are an important part of future war, why not add them to the plane's weapons?

After the Cold War, the B-1 platform lost a clear mission, their specific role was no longer needed. In Afghanistan they found a new calling as a ground-attack, close air-support platform, thanks to a high weapon load out, and long loiter times.

Fast forward to today. The United States’ hypersonic missile program seems to be moving along at a fast clip.

Air Force General Timothy Ray said that the Air Force plans on reinstalling eight external pylons on B-1s that were removed due to treaty restrictions. These external pylons would be used for attaching hypersonic missiles.

One of the options in the Air Force arsenal is the AGM-183 Air-launched Rapid Response Weapon, a hypersonic cruise missile. The AGM-138 is a hypersonic boost-glide vehicle that is contained within a booster. Although details are unknown for certain, it would be capable of flying over Mach 5.

But there is another hypersonic option that is being developed. The Hypersonic Air-breathing Weapon Concept, or HAWC, is a joint Darpa-U.S. Air Force project.

According to a DARPA press release, the HAWC project aims to “to develop and demonstrate critical technologies to enable an effective and affordable air-launched hypersonic cruise missile,” a possible indication that the HAWC is more of a technology demonstrator or test platform.

“My goal would be to bring on at least a squadron’s worth of airplanes modified with external pylons on the B-1, to carry the ARRW hypersonic cruise missile,” General Ray said.

He admitted that some of the B-1s need substantial work, but that the Air Force has “got support from Congress to do this. This is a thing that we’re working to get ourselves through. We’ve had a very good dialog.”

As I previously wrote, the B-1 has had a bumpy ride. As of last year, B-1s were restricted from low-level flight, due to the additional stress those types of flights put on airframes. The Bones may be starting to show their age.

Perhaps the B-1 Bone has escaped the executioner’s axe. Hypersonic missiles might just be their saving grace.