What Will Replace the AH-64 Apache Helicopter? 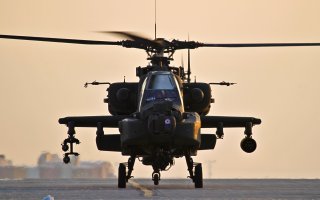 Here's What You Need to Know: Don’t expect to see a futuristic-looking prototype anytime soon.

Sikorsky is developing the SB-1 Defiant in tandem with Boeing. Their prototype is based on the older but similar Sikorsky X2 design. Both designs use two counter-rotating propellers for lift, and a pusher propeller at the rear for forward movement, which allows for great top speed and increased range.

Bell, one of the joint developers of the V-22 Osprey, is also in the competition. Their tilt-rotor design, the V-280 Valor is in some ways similar to the earlier V-22, though it is sleeker and lacks the V-22’s heavy-lift capabilities.

The SB-1 Defiant, also known as the SB-1 Defiant, just hit a new top speed record in June. During a flight test, the SB-1 registered a flight speed of 235 miles, or about 380 kilometers per hour, making it faster than most helicopters.

In a talk with reporters, a senior Sikorsky project director talked about the Defiant’s new speed record, saying that, “exceeding 200 knots is significant also because it’s beyond any conventional helicopter speed, and we understand that speed and low-level maneuverability is critical to the holistic survivability in a future FVL environment.”

The Defiant wasn’t even using maximum engine output to get up to speed. According to one of the platform’s test pilots, less than 50 percent of the engine’s output was being used, and said, “expect a lot more in the future because we have a lot more power to apply to this machine.”

The platform would bring several new capabilities to the Army. Though the Defiant has the same overall footprint as the venerable Black Hawk helicopter, it would be able to fly twice as fast and have double the Black Hawk’s range while being more agile and maneuverable in the air. One of the platform’s big selling points is the ability to fly lower to the ground at higher speeds than a helicopter could, allowing the Defiant to avoid ground-based enemy radar.

Still, there is a long way to go. Regardless of whoever ends up winning the Future Long-Range Assault Aircraft competition, the first units won’t be operational until sometime in the 2030s—nearly a decade or more in the future. Don’t expect to see the futuristic-looking prototype anytime soon.