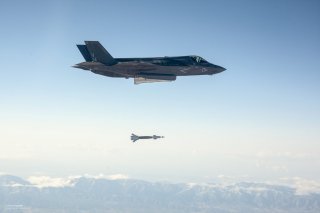 Here's What You Need to Remember: Naturally, seeker technology and advances with guidance systems and targeting are vastly different than they were years ago. Yet, the fundamental configurations, or bomb structures themselves, have been somewhat stagnant.

US Air Force researchers and bomb-makers are expressing concerns that the modernization of air-dropped weapons has been lagging-behind the many technical advances built into the larger platforms that drop them, such as the B-2, F-35 and the emerging B-21.

While advances in stealth technology, targeting, aerodynamics and computer avionics all continue to progress at alarming speeds, innovations when it comes to bomb configurations have not seen a commensurate technical acceleration, service leaders say.

“The bomb body, minus the guidance unit, is relatively unchanged. A 500-lb. bomb body was flown in 1918, and the F-35 is now dropping these. You can’t have an airplane and not have the same generation of munitions associated with it” Maj. Gen. Larry Stutzriem, USAF (Ret.) said at the Air Force Association Air, Space & Cyber Conference.

Naturally, seeker technology and advances with guidance systems and targeting are vastly different than they were years ago. Yet, the fundamental configurations, or bomb structures themselves, have been somewhat stagnant, service observers say.

Current areas of inquiry, according to the Mitchell Institute’s study, explain that, for decades, most bombs have operated with “fixed-explosive envelopes.” As a result, current developers are looking for innovative methods of achieving increased lethality with precision and variable yields—meaning bombs can be configured to tailor explosions depending on the target.

As co-author of the Mitchell Institute study, Stutzriem characterized the research as an effort to seek wider explosive ranges through a “combination of heat blast and fragmentation.”

Developing what Air Force engineers call “flight selectability” is essential to these developmental efforts, as it will enable dynamic combat-targeting to adapt while an aircraft is airborne. This can be done with a range of technologies to enable improved precision using multi-mode energetics and specialized structures engineered into the warhead itself, Col. Gary Haase, Air Force Research Laboratory (AFRL), said at AFA.

Also, developers are working on smart-fusing embedded in a weapon providing an explosive range from a wide-area effect to a lower collateral damage effect, Stutzriem and Haase said.

“The concept is to have selectable effects munitions capability in the cockpit,” Stutzriem explained.

These kinds of technical advances, wherein munitions can be adjusted in-flight, are inspiring new thinking when it comes to Concepts of Operations (CONOPS). Newer targeting and explosive yield variation naturally changes the types of attack missions falling within the realm of the possible. For instance, if a weapon could be configured for a larger or lower blast-effect in flight, an aircraft could attack more targets, have more options or make adjustments much more easily amid fast-changing combat situations.

“There is a compelling needed for a new regime of munitions for expanded effects,” according to Haase.

Air Force bomb developers specifically cited a promising weapon designed to encompass many of these attributes; an adaptable carbon fiber bomb called the BLU 129 was developed for the specific need to create low collateral damage. At the same time, the weapon is said to be extremely lethal and is referred to as having “the world’s largest sniper accuracy with controlled field effects.

In an analysis of the weapon, Globalsecurity.org writes “the BLU-129/B is a 500lb bomb body that is made from carbon fibers, instead of traditional steel. This 500lb bomb body will be joined to JDAM tailkits, and eventually other weapon tailkits that interface with the standard 500lb bomb body shape.”

Given that combat warfighters discovered more applications for the weapon beyond things it was initially built to do, the Air Force is now restarting production of the weapon.

“There are limited numbers of this weapon, and we want to hold onto it for those missions which need to have only that capability,” said Haase.

The BLU 129 is described as having innovations called “adapted effects design” with a contained lethal radius, yet precise and substantial destructive ability. “This allows a much-reduced size of warhead with the same kill capability,” said Stutzriem. By extension, the BLU 129 facilitates variable-yield effects allowing for extremely effective, yet precise and more narrowly-configured attacks.

Time-sensitive targeting driven by a need for fast-moving ISR is also emphasized in the Mitchell Institute study, according to Dr. John S. Wilcox, Director of Munitions for AFRL. Wilcox explained that emerging weapons need to quicken the kill chain by enabling attack pilots to make decisions faster and not lose moving target sets.

When considering the discussed discrepancy between aircraft modernization and new air-dropped bomb technology, the Commander of Air Force Global Strike Command, Gen. Timothy Ray, said new large platforms such as the B-21 and F-35 are engineered with a specific mind to accommodate new weapons as they emerge.

"The Air Force is staying focused on weapons modernization," Ray told a group of reporters at AFA.