Where did the Modern Mercenary Industry Come From? 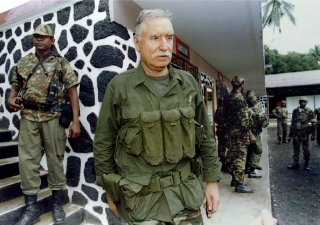 Here's What You Need to Know: Frenchman Bob Denard’s bloody antics in the Comoros helped establish a precedent, follow the money.

The Congo crisis was the young Denard’s first war-for-hire. He would later take part in conflicts in Yemen, Benin, Gabon, and Angola, among others.

A certain class of warrior deliberately obscured their origins, intentions, and methods. They fought not for nation or state, but for money. More often than not, they didn’t even use their real names.

The three islands of the Comoros together represent Africa’s third-smallest country, with just 863 square miles of tropical forest-covered mountains and hills, beaches, and dense, seedy, labyrinthine cities for its nearly 800,000 people.

The future Comoran president’s men offered Denard a $15,000 advance in exchange for his help raising an army against Abdallah. Denard called in some old cronies from Gabon and France, purchased 10 tons of weapons, ammunition, and other supplies; and caught a commercial flight to Moroni, the Comoros’ biggest city.

He was a terrible leader. His drug and alcohol abuse, and his tendency to look to his witch doctor for strategic guidance, compounded his policy failures. Soon the treasury was empty, and the country was growing hungry.

When the witch doctor told Soilih he would be killed by a white man with a black dog, the increasingly mad president sent men to kill all the dogs on the island—an obviously fruitless task.

And Denard reaped the rewards. Installed as chief of the 500-strong presidential guard—in effect, the military of the Comoros, equipped with machine gun-armed jeeps—Denard was widely considered the real power in the Comoros.

But it seems Abdallah resented and feared Denard’s power. The Frenchman had, after all, helped overthrow rulers in Nigeria, Angola, and Yemen. After 11 years of unofficial joint rule, in 1989 there were rumors Abdallah planned to replace Denard as chief of the guard.

The timing seemed right. All over the world, old alliances were weakening. The poor nations of the world were throwing off the chains of superpower conflict, ejecting their agents and realigning their interests.

Newspaper accounts, what few there were, varied wildly. At least one breathless article described a mercenary firing a rocket-propelled grenade into Abdallah’s bedroom. The scant press actually paying some attention assumed Denard or his men killed Abdallah. Everyday Comorans believed it, too. They rioted in the capital city of Moroni, chanting, “Assassin! Assassin!” when Denard appeared.