Who Wins Between Russia's Su-30SM vs. F-22 Stealth Fighter? 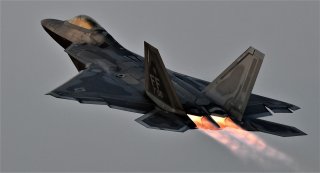 Here's What to Remember: While the Raptor’s superior performance can make up for a lot of the deficit, close-in, the lack of a high off-boresight missile is a serious deficiency—which the U.S. Air Force hopes to address in the coming years.

While the Russian deployment is significant in shoring up the Assad regime, in the unlikely event of a confrontation with U.S forces, a handful of Su-30s would not last long against the overwhelming odds they would face. U.S. forces in the region have a host of advanced fighters available to them—the most potent of which is the Lockheed Martin F-22 Raptor.Moreover, the U.S. forces in the region far outnumber the Russian forces.

While the Su-30SM is a very capable fourth-generation fighter, it stands no chance against the Raptor—especially in a beyond visual range engagement. Purely on hardware terms, the Raptor has an advantage on every metric except range and payload. The F-22’s combination of stealth and sensors means that the Russian aircraft would likely be destroyed before they had any idea they were being targeted. During regular training exercises in the United States, a group of four F-22s will have to practice against as many as twenty “enemy” aircraft in order to get any useful training accomplished.