Who Wins a J-20 Stealth Fighter Versus F-22 Raptor Matchup? 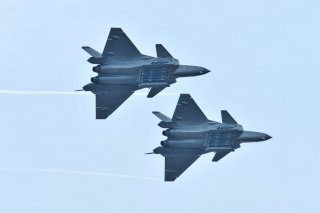 Here’s What You Need to Remember: Ultimately, these enhancements may not be enough for the J-20 stealth fighter jet to truly rival an F-22 Raptor unless the weapons range and their guidance systems can equal or outmatch it. China’s fleet of Chengdu J-20 jets will remain vulnerable to fifth-generation aircraft in large measure because there simply are not that many of them.

The People’s Liberation Army Air Force is pursuing various upgrades to its fifth-generation Chengdu J-20 stealth fighter jet so that it can compete with the U.S. Air Force’s F-22 Raptor.

These upgrades include increasing the number of air-to-air missiles the jet can carry in “stealth mode” to improve its air-attack range, precision and firepower, according to the Defense Department’s report to Congress on Military and Security Developments Involving the People’s Republic of China.

The report, which was published this year, says the Chinese are installing a thrust-vectoring nozzle and adding an F-22-like “supercruise” ability with the installation of indigenous WS-15 engines.

Supercruise refers to the ability of the F-22 Raptors to achieve and sustain Mach speed without having to use an afterburner, due to the power and thrust of the engine. This means the jet can pursue longer and more detailed attack missions without having to return to refuel as often as most fighter jets need to refuel. Much like an F-22 Raptor, a supercruise-enabled J-20 would be able to remain in high-speed engagements for much longer periods of time without having to exit the fight and return for refueling.

Upgrading J-20 stealth fighter jets to rival the F-22 Raptors is likely to be difficult because Lockheed Martin and the Air Force have upgraded the software of the F-22s Raptors in recent years. This upgrade is referred to as 3.2b. It greatly improved the flight range, targeting precision and durability of several crucial air-to-air weapons such as the AIM-9X Sidewinder Missile and AIM 120-D Advanced Medium-Range Air-to-Air Missile. The software upgrades, Lockheed weapons developers explain, improve the electronics on the weapons to increase reliability through hardening and enable mid-flight course corrections. For example, the sidewinder can be fired “off boresight,” meaning that it can change course in flight to attack a target on the side or behind the aircraft. There does not have to be a linear, straight-ahead flight patch for the weapon to travel to and hit an enemy target.

The upgrades to the J-20 stealth fighter jet will likely be difficult to discern from afar. However, the Defense Department’s report mentioned something about preserving stealth mode, which may be a reference to the jet’s internal weapons bay. This stealth aircraft might be able to carry weapons and fire them while preserving a smooth, blended stealthy exterior absent protruding edges or sharp contours likely to generate a return radar signal to enemy air defenses.

Ultimately, these enhancements may not be enough for the J-20 stealth fighter jet to truly rival an F-22 Raptor unless the weapons range and their guidance systems can equal or outmatch it. China’s fleet of Chengdu J-20 jets will remain vulnerable to fifth-generation aircraft in large measure because there simply are not that many of them. Multiple news reports estimate that China operates roughly fifty of the fighter jets, which is a very small number when compared to the 160-plus F-22 Raptors and a planned fleet of 1,763 F-35A aircraft. At the same time, China is well known for its production infrastructure and blend of commercial and military production entities. This competitive difference could prompt it to expedite production. It’s possible that China plans to greatly increase its fleet of Chengdu J-20 jets.