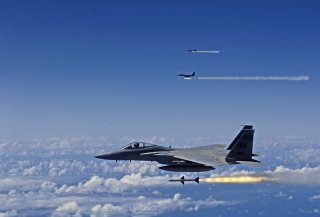 Here's What You Need To Remember: The F-16s are meant to stand in for Russian Su-57 and Chinese J-20 planes. Soon, it is hoped that F-35s will join them.

Similar exercises in the coming years could feature even more sophisticated mock adversaries. The Air Force is trying to stand up its first aggressor squadron flying stealth fighters.

"The most exciting and beneficial parts of Pacific Raptor were the ability to integrate with the F-22 and train to an advanced threat, replicated by F-16s," said Maj. Justin Miller, a 63rd Fighter Squadron pilot and one of the exercise planners.

The F-35 and F-22 could face an even more advanced threat in future war games, if the Air Force can convince Congress to let it proceed with plans to convert early-model F-35s into aggressor planes.

But Congress has delayed the Air Force’s plan to establish an F-35 aggressor unit. The 2020 defense policy bill prohibits the Air Force from transferring F-35s to the adversary air role until Air Force chief of staff Gen. David Goldfein submits a report to Congress detailing the service’s plan for modernizing its existing aggressor fleet.

So for now, F-16s are among the most capable adversaries that F-35 and F-22 squadrons can hope to face in mock combat.

David Axe formerly served as Defense Editor of the National Interest. He is the author of the graphic novels  War Fix, War Is Boring and Machete Squad. This article first appeared in February 2020.