Why America (and the Army) Still Needs the A-10 Warthog 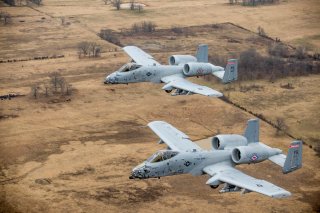 Here's What You Need to Remember: The A-10 system is more than just a capable aircraft. It’s a weapons system built on a community that has been the cornerstone of the Air Force’s commitment of support to the Army for the last four decades. If the Air Force shifts the CAS mission to the F-35A, whatever part of the A-10 community that survives the initial transition will die the same, slow death suffered by other Air Force missions

A twenty-five-year veteran of the U.S. Air Force, John “JV” Venable is a senior research fellow in The Heritage Foundation’s Center for National Defense. This article first appeared in 2016 and is reprinted here due to reader interest.