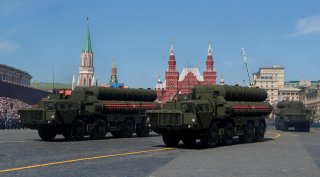 Here's What You Need To Remember: One can conclude that at the moment Washington lacks means to stop the Turkish purchase of Russian air defense systems S-400. If other Middle Eastern countries follow Turkey as S-400 buyers, it will be obvious that the United States is far from an undefiable force in the region. The biggest question now is how U.S. policymakers will react to this tectonic change of America’s status in the Middle East so important to its prosperity and security.

The firm decision by Turkey and Qatar’s to buy Russia’s S-400 air defense systems shows, once more, how increasingly challenging the Middle East is becoming to U.S. foreign policy. The issue is not whether Washington should continue its dominating presence in the region, but rather how the United States can achieve its strategic goals in the challenging environment of the Middle East.

During the last couple of decades, one could follow a very conspicuous debate on the future of U.S. Middle Eastern policy. The argument that Washington should stop policing the turbulent region and withdraw to save American lives and treasure has become very prominent, especially after the boom of shale oil and gas in the United States amid constant Middle Eastern turmoil. Nevertheless, it is obvious that the Middle East is too important to U.S. security and prosperity to leave the region. (One example to prove this is the influence of global oil markets on U.S. domestic gas prices.) The United States has to readjust its policy in the region where many historically reliable tools are no longer working.

The regional interest in the S-400 Russian air defense system is a case in point. On March 5, 2019, the State Department confirmed one more time that Washington warned Turkey that “its potential acquisition of the S-400 (air defense system) will result in a reassessment of Turkey’s participation in the F-35 program and risk other potential future arm transfers to Turkey.” Yet continued warnings have not been able to change Ankara’s decision to buy S-400. Qatar’s Foreign Minister Sheikh Mohammed bin Abdulrahman Al Thani confirmed that his country continues to examine the purchase of Russia’s S-400 missile air defense system. This means that two major U.S. allies in the region might be interested in buying a missile system from U.S. geopolitical rival.

One can notice that this development confirms the high quality of Russian defense industry products. Despite all the statements about Russia being just “a gas station,” the country remains a global leader in this high-tech defense sector on par with the United States. Oversimplified perceptions of Russia do not help American foreign policy in the Middle East and elsewhere. Ironically, Saudi Arabia’s Crown Prince Mohammed bin Salman, the leader of another U.S. “great ally” in the region, included the Saudi defense industry in his ambitious program of modernization aimed at diversification of kingdom’s economy. That program was also once intensively praised by the U.S. media. But Russia does not need a similar program as, historically, Moscow’s defense industry is one of the pillars of Russia’s economy. It is clear that the interest in the Middle East for Russian weaponry can result in losses for American defense exports.

Going back to the geopolitical breakdowns of Middle Eastern affairs, one can notice that, whatever Moscow’s strengths in the region, Washington needs to upgrade its political arsenal. Again, the issue of S-400 purchase by Turkey is exemplary. Experts on the diplomacy of the last century are familiar with Beijing’s practice of constant warnings to the Soviet Union and America, which did not have any drastic consequences to either of the great powers, as Moscow and Washington paid little attention to Chinese admonitions. Washington risks repeating China’s fruitless routine as it tries to tell its allies not to buy S-400s. Undoubtedly, the United States can increase pressure on Ankara to try and get Turkey to cancel the deal. However, in this case, the United States might find itself in a full-scale confrontation with a North Atlantic Treaty Organization ally in the time when cooperation of Turkey is necessary to address a range of important issues—from the future of Syria, to Russian energy exports to Europe, to China’s Belt and Road Initiative, to Iran’s nuclear and missile ambitions.

Furthermore, this situation is increasingly paradoxical. Except for Iran and Syria, virtually every Middle Eastern country is officially an American ally. However, this does not always amount to improving America’s ability to reach its goals. Regional players themselves are pressured to achieve their foreign political agenda against plans of neighbors. During the same news conference on March 4, 2019, the Qatari foreign minister emphasized that his nation is considering the deal with Russia despite a possible Saudi pushback, stating “it is none of their business.” Thus, he reminded everyone that the tiny country of Qatar is able to withstand Saudi pressure supported by the majority of the Arab world. One should not be surprised that Saudi Arabia also indicated its interest in the Russian air defense system, especially as that system has been praised by experts. These developments mean that two Gulf nations, both U.S. allies, important to American security and military planning, are considering purchasing Russian weaponry as a part of a showdown between them. It is difficult to find where U.S. foreign policymakers should start solving this riddle.

Additionally, the possibility of U.S. sanctions as a tool of changing Tayyip Erdogan’s mind on dealing with Russia brings another set of problems. After last year’s decision by Trump to withdraw from Iran Deal, the world hardly needs an additional reminder that Washington is ready to use its economic power to reach foreign policy goals in a coercive way. Here the United States, pressuring Turkey, might add more ammunition to Russia’s pleas to create international mechanisms to counter American sanctioning capacities. If this kind of international cooperation against U.S. economic tools of foreign policy starts, its repercussions will be felt far beyond the Middle East or U.S.-Russian relations.

To summarize, one can conclude that at the moment Washington lacks means to stop the Turkish purchase of Russian air defense systems S-400. If other Middle Eastern countries follow Turkey as S-400 buyers, it will be obvious that the United States is far from an undefiable force in the region. The biggest question now is how U.S. policymakers will react to this tectonic change of America’s status in the Middle East so important to its prosperity and security.